REMEMBRANCE OF BEERS PAST

I’ve been collecting notes on a number of stellar beverages over the past six weeks that I thought important to share with you. Let this dewy-eyed remembrance of recently-consumed beers serve as a consumer guide of sorts – a helpful shorthand look at those ales you should be going full-on gonzo to acquire an experience with, as well as a cautionary tale of several to avoid (or ignore). Let’s take it from the top, as it were. 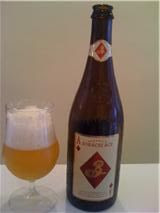 BROOKLYN BREWING “SORACHI ACE” – An absolutely brilliant-tasting saison, as good as it gets and then some. SORACHI ACE is an amazingly dry and cloudy ale, which ratchets down the normal yeast and hops in your typical garden-variety saison, and adds a really rich, lemony zest to the whole thing. You smell this thing for miles – and then even better, you get to taste it. A masterpiece completely deserving of the word. 10/10. 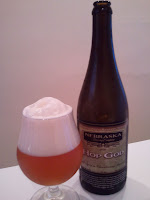 NEBRASKA BREWING “HOP GOD - RESERVE SERIES, AGED IN FRENCH OAK CHARDONNAY BARRELS"” – This was a landmark beer for me. A year ago I wrote a post claiming I’d (probably) never buy a beer that cost more than $20. Whilst in New York, with all the good feeling and money-wasting extravagance such a visit inspires, I dropped the hammer on this one at the urging of a friend. $23. I actually put it back after it was rung up, then said awwhatthehell. And confound it, it was actually that good. A Belgian IPA with tripel-like spiciness – yum. A musty yeast smell gives way to grapefruit tang, and the “unmistakable flavor” of Chardonnay barrel – which this reserve version of HOP GOD was aged in. 10% ABV, 101 IBU, and one of the strongest, most special, and most truly barrel-aged beers I’ve ever had. 9.5/10.

PRETTY THINGS “FIELD MOUSE’S FAREWELL” – Here’s another of my new favorite brewers, who knocked me cold with their excellent BABY TREE not long ago. This rustic golden ale has barley, oats, wheat and rye making the magic happen, and yes, “rustic” is the operative word. A deep golden ale that these Massachusetts-based yankees make you feel was transported from the cobblestoned streets of Brussels about five minutes ago. 9/10.
THE OUTSTANDING
BARON BREWING – “THREE SKULLS BLOOD ORANGE WIT” – Oh yeah. A really drinkable witbier I had in a Seattle restaurant last week after being told “you’ll like this if you like BLUE MOON”. I actually kinda do like Blue Moon, and I like this a lot better. Yellow/orange pour, thick luscious mouthfeel, with rich blood orange taste and a little grapefruit. More fruit beer than wit. Really drinkable and something I pray to YHWH I’ll get more of someday. 8.5/10.
THE VERY GOOD 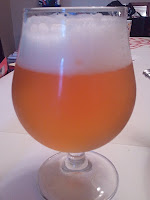 STONE/VICTORY/DOGFISH HEAD – “SAISON DU BUFF” – It smells of yeast. It tastes of yeast. Hey, I’ll bet there’s even yeast in the beer. This collaboration saison between two giants and one near-giant is quite delicious. They say it has “parsley, sage, rosemary and thyme”. Ouch – you almost lost me there. It’s not all that evident, but there is a marked spiciness. Foamy, carbonated, and when it was gone I pronounced it a 7.5/10. 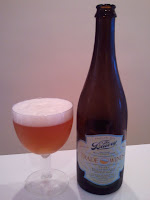 THE BRUERY - “TRADE WINDS TRIPEL” – Because j’adore THE BRUERY, and hold them to a very high standard, this came off as something of a disappointment, while still being quite good. This Belgian tripel is less dry and more fruity than I’m used to. Citrusy orange, yeasty of course, and a little sweet. Just not a Bruery-style knockout. 7/10.

NAPA SMITH “BONFIRE” – This sat in my “beer fridge” for so long I finally had to crack it open because I was beginning to feel sorry for the brewer. It’s a nice imperial porter, weighing in at 8%. Creamy coffee and chocolate taste, a little more coffee than cocoa. Thin body, nice smell and very slight alcohol burn. A decided step below The Abyss, Black Butte XXII etc. but they should still be proud they got it this good. 7/10.
THE DECENT 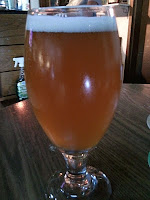 21ST AMENDMENT – “WIT CIN’D” – A cinnamon witbier? Well all right. A spicy, fresh, 6% ABV wheat ale with thick mouthfeel and high carbonation. Drinkable and interesting. Like a lot of 21A’s beers it’s “good enough”, but seems like they should be aiming a little bit higher than that, don’t you think? 6.5/10. 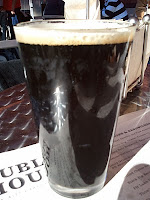 DESCHUTES BREWING - “HOP IN THE DARK” – I want to take a point off my score simply because of the trumped-up PR term “Cascadian dark ale” – barf! – that some Oregonians want to apply to any IPA that’s black in color. This wasn’t all that bad for a dark IPA, just somewhat thinner and less flavorful than I’d expected from a heavyweight like Deschutes. 6/10.
THE LAME
ELYSIAN “THE IMMORTAL” IPA – Don’t know what it is about ELYSIAN BREWING in Seattle, but I just do not like their beer. Every one of these well-distributed ales that I try falls well below the midpoint for the style, including with this IPA that I see everywhere. Malty, piney hops, and so little in the way of zest or character that it tastes like sloppy homebrew that I’d make. And I don’t even brew. 5/10.
Posted by Jay H. at 5:30 PM