THE BIZARRE TERRORLAND OF NORTH KOREA 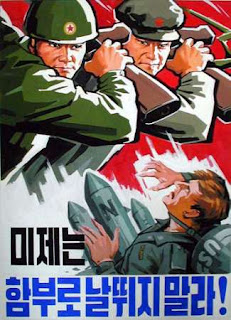 No, this is not a rehash of why North Korea’s the most terrifying totalitarian nightmare-state since Stalin’s Soviet Union – though it is a topic I’m perversely interested in, since we’ll all likely witness the eruption (and hopefully the liberation) of the North Korean people within our lifetimes. It will be a major event, full of grim revelations that will blow the lid off the most tightly-controlled society of our time. I recently read BR Myers’ North Korea book “THE CLEANEST RACE”, which attempts to understand juche and racial theory, and why The State acts as it does, and how it chooses to willingly portray itself to the outside world. The book is OK – I can’t say I fully recommend it, if only because it’s more of a polemic that I found it hard to learn from. Yet I, and probably all of us, want to know more about the lost, only-sometimes-lamented people of North Korea and the horrific deprivations they suffer on a daily basis.
These two recent podcasts, both very short, are helpful. One comes from the NEW YORKER OUT LOUD podcast, and it’s an interview with Barbara Demick, who wrote a book high on my must-read list called “NOTHING TO ENVY: REAL LIVES IN NORTH KOREA”. In this podcast she recounts her interviews with refugees who slipped across the Chinese border, and the lives they chose to leave back home. The other is from the Cato Institute, and it’s a bit of a polemic itself, about a hideous, punitive currency devaluation that was undertaken by the regime last November that’s having catastrophic effects on the long-suffering people of the DPRK. I listened to them back to back earlier this week, and thought they were devastating enough to share them with you today.