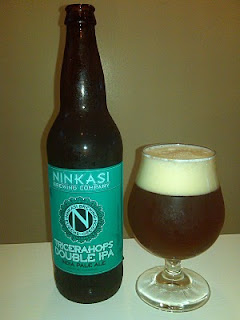 I threw a mild – very mild – rebuke to the city of Portland, Oregon and their “Beervana” reputation a couple of posts ago, and as expected, I myself got rebuked. Good times. That tossed-off line wasn’t to put a pox on all of the Great State of Oregon, no sir – not when there’s NINKASI BREWING ’s awesome double IPA TRICERAHOPS heading down the I-5 from Eugene. And not when I’ve just booked the family for a vacation to Ashland and Bend, Oregon coming up, a replacement trip for Santa Barbara. Those of you on the California coast, you know what redonkulous weather we’re having this summer. I read that the summer average in Los Angeles this year is 66 degrees. Say what? Next week’s highs in Santa Barbara? 65 degrees, for what was supposed to be the quintessential beach/pool vacation. It’s time to head north, to the land of NINKASI beer and 85-degree head-scorching.
Just looking at this picture I snapped of TRICERAHOPS is making me ungodly thirsty. The beer showed up inexplicably at a Beverages & More store in Emeryville, CA, and I flat-out couldn’t believe my luck. I’d just read that week about how NINKASI BREWING were masters of the India Pale Ale arts, and here were two of them ready for purchase in Northern California (the other was TOTAL DOMINATION IPA, which I haven’t tried yet). And then they delivered, and then some. TRICERAHOPS is about as creamy as a hoppy beer gets, pouring a luscious and viscous orange/brown color and biting the heck out of the tongue with piney hops. Really juicy and strong, with a deep and rich malt body that gives some oomph to counteract the hops. Apparently it steps on the scales at 100 IBU’s, and as we discussed previously, that’s a lot of bittering action. Definitely up in the top tier of IPAs to be had, and it’s refreshing to know that there are new monsters to be discovered in that category every week if you choose to look for ‘em. 8.5/10.
Posted by Jay H. at 5:05 PM