"THE ART OF THE STEAL" 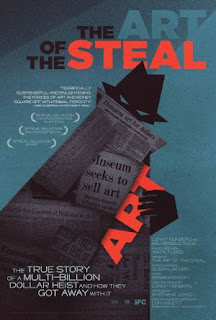 The 2010 documentary "THE ART OF THE STEAL" breathlessly follows a scandal of sorts: the wholesale dismantling of an eccentric millionaire's will, wishes and contracts in order to snatch his incredible private art collection and place it into "public" hands. I'd once heard about this wonderfully weird art museum in a residential neighborhood 10 miles outside of Philadelphia - the Barnes Collection - from my in-laws. They told me how the hours are slipshod, how it's closed some days and open others, and how you almost always have to make an appointment to get in.
And what a collection it is. The Barnes Collection is loaded with hundreds, obviously one-of-a-kind paintings from Degas, Renoir, Picasso, Van Gogh and Monet, all bought in the 1920s and 1930s before the European impressionists and post-impressionists hadn't quite reached the exalted levels they occupy on the art chain today. Dr. Alfred C. Barnes bought them "on the cheap", comparitively, and arranged them in displays in his own home that went against the ways & mores of the traditional American museum. Once he died, all sorts of local arts types wanted to get their meathooks into these paintings, yet Barnes had a will that made it quite clear that they were to stay in his residential museum-home, and were to only to be shown to "study groups" at hours of his estate's choosing. For decades, there've been lawyers, politicians and art groups chipping away at his will, until the final insult of just the past couple of years: the collection is due to be moved to the Philadephia Museum of Art downtown - a place Barnes absolutely detested. 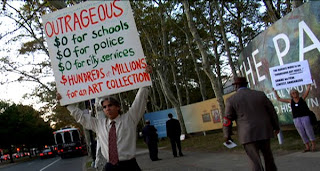 The documentary is a full-on attack piece on the sanctity of this violation of Barnes' wishes. Because it's so one-sided, it actually does a pretty good job, on the surface, of making one's blood boil. The scoundrels! I'm a property-rights kind of guy, but even I have to agree with the NY Times' take on this film:
"....surely there are more nuanced arguments for the move than those found here, which could only strengthen the documentary, saving it from caricature. At times the fight comes across as a smackdown between art snobs who want to preserve Barnes’s right to exhibit his masterworks however he wanted because, well, he paid for them (a curiously underexamined refrain), and vulgarians who want to turn his patrimony into tourist bait along with the Liberty Bell and an actor in a Ben Franklin getup. What remains unanswered, finally, is the larger question of whether deep pockets ensure custodial rights forever."

I had a similar question going through my head, one that definitely leads down a slippery slope. Is there something called "the public interest" as it relates to arts and culture? Would Modigliani, Renoir and Picasso masterworks be more beneficial to "society" if put in the public sphere, or because of Barnes' purchase of them, does he have full rights to hide them, deface them or even destroy them? I suppose he does indeed have those rights, and it's why I side with the documentarians - but they could have at least asked the question, you know? Hedonist Jive says 3 stars, on a 5 scale.
Posted by Jay H. at 5:41 PM