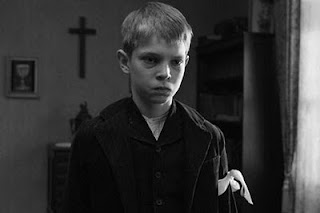 Despite ending with a bit of a clunk, Austrian filmmaker Michael Haneke’s 2009 “THE WHITE RIBBON” is an intense, feverishly dark look at a German village on the eve of World War I., one that succeeds on nearly all levels. The film, austerely shot completely in black and white, serves as an indictment against personal and societal repression in all its forms. Though many of the reviews I read described this film as a “how the children of 1913 became the Nazis of 25 years later”, it’s definitely more of a subtext than something overt, and likely something you’d never have picked up on without the power of suggestion from a review. “The White Ribbon” succeeds incredibly well on its own terms, and has moments of filmmaking as powerful as anything I’ve seen in years.
Since the film deals so unceasingly with repression and guilt, I’ll highlight a moment that was so intense in direction, production and acting that I watched it on the DVD three times over. The bucolic village’s pastor, an absolute tyrant who brutally canes his children and ties the putative white ribbons in their hair for months at a time when they’ve misbehaved, is in his study with his preteen son. He gives his son a lecture about a local boy who went blind, developed pustules all over his body, descended into madness and finally died – because he began to masturbate as he entered adolescence, He then shames his son, horribly, into a confession of the same. The boy, pictured here in that scene, lets tears stream down his face while trying his best to maintain composure, and the whole thing is absolutely devastating. I’ve seen Ingmar Bergman pull off dramatic scenes this good that make every hair on your body stand up screaming, but it’s a real gift, and Haneke’s obviously got it (He made “The Piano Teacher” and “Cache” as well, both good-to-excellent).

This is the sort of rules-based, “God-directed” fear and shame that drives the village into acts of silent violence, reprisal and brutal humiliation of anyone not falling into line. The film’s narrator, a kindly schoolteacher who is the sunny foil to everything swirling into chaos around him, even gets caught up in the descent into madness, before being immediately shipped off to war the second Germany decides to invade Serbia. That’s where the film stops, and where one is left to draw his own conclusions. I might have appreciated a good 5 minutes of reflection and what parents call “transition time” in getting to that point, but the film as a whole gave me hours of things to ponder, most of them mentally discomforting yet stimulating all the same. It won the Palm D'Or at Cannes last year, and I can absolutely see why.
Posted by Jay H. at 6:00 AM