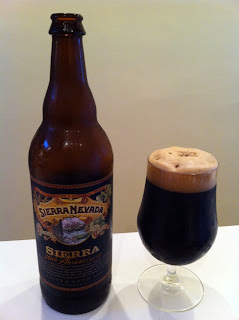 One of my biggest complaints about the “beer journalism” establishment, such that it is, is that it continually churns out the same “salute to craft brewing’s pioneers” articles over and over, ad nauseum. I wrote about the phenomenon here. Beer people can be such audacious namedroppers – “oh Fritz, you know” – “oh, I talked to SAM for hours at GABF” etc. So here we’ve got the ultimate “craft brewing pioneers” beer, an ale to set off another round of dewy-eyed reminiscing about the era when lonely homebrewers pulled themselves up by their proverbial bootstraps, against all odds, to launch a “taste revolution” blah blah blah. Thank you, Fritz Maytag of Anchor Brewing, and thank you Ken what’s-your-name, who founded New Albion Brewing way back in the Dark Ages. Without you, our lives would be severely deficient.
Which brings me back to this gonzoid 2010 imperial stout that SIERRA NEVADA BREWING commissioned from the aforementioned fellas to mark their thirtieth anniversary. It’s one of several 30th anniversary beers from a brewer who’s been living large since 1980. And it might be the best imperial stout I’ve ever had. Wait, did he just type that? After years of incredible imperial stouts rolling out from all four corners of the USA? Why yes I did. BROOKLYN BLACK OPS, you’ve been topped. This dark black pillow of a beer is perfection in a glass – well, several glasses. Several luscious cocoa and dark, burnt malt glasses. It’s a beautiful beer from start to finish, with no hot boozy alcohol to get in the way of each swallow, despite the 9.2% alcohol lurking within. Seriously, I could put my head down in this thing and go to sleep. I love those craft brewing pioneers, I just love 'em. 10/10.
Posted by Jay H. at 10:58 AM