CIGAR CITY BREWING's "IMPROVISACION" - ANOTHER BEAST FROM THE EAST 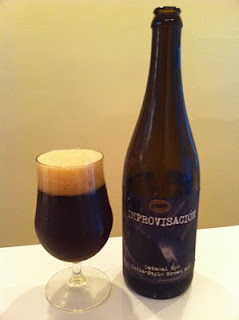 Florida was quite rightly considered a vast tropical wasteland of unslaked thirst by beer aficiandos for many a year until recent entries into the field from SAINT SOMEWHERE BREWING and the "community's" newest heroes, CIGAR CITY BREWING out of Tampa. Cigar City in particular are not messing around - no pale ales, ambers and blueberry wheats for these folks - it's all about aging, experimenting, adjuncts and throwing your hands in the air afterward & hoping for the best. It's good to know that folks like this are all over the US of A and have the savvy to get their beer in the hands of people who need to drink it - like me.

So thanks to Mark for getting me a bottle of IMPROVISACION, a rare 22-ounce conconction that they call an "Oatmeal Rye India-style brown ale". It was certainly not to be an average night of beer tasting. IMPROVISACION is a jazz-like melange of flavors, ranging from rye to to cocoa to deep malt to, uh, leather. It's the heavy rye taste that lingers long after the swallow, and that this beer is most notable for. 9% alcohol, definitely something that can be "handled" while flying solo but really one of those beers that begs for company and deep, argumentative discussion over its true characteristics. I scored it a 7.5/10 and hope to dig into more CIGAR CITY inventive weirdness soon.
Posted by Jay H. at 2:19 PM