BOOK REVIEW: STEIG LARSSON - "THE GIRL WITH THE DRAGON TATTOO" 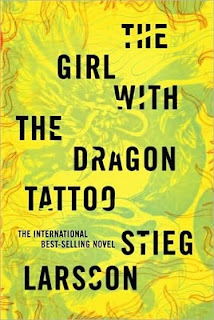 For years I've been wanting to take a big plunge into crime fiction - not just the 50s/60s stuff I've dabbled in (Charles Willeford, Jim Thompson et al) - but to go the whole proverbial nine yards, and set myself up as a true well-read, 12-books-a-year dilettante. That's how I like to get into a particular passion - go all the way, and not just skim the popular surface. My love of fiction and of reading, however, collides heavily with my greater love for non-fiction and other realities like - well, like working a job, spending time with my family and all the solo cultural and political obsessions I document here. So loads of lowbrow-ish reading for pleasure takes a back seat. My pal Danny Plotnick, proprietor of the PLOTBOX blog among many other pursuits similar and yet different to mine, is the sort of crime fiction know-it-all I someday aspire to be. As soon as I finish those Top 10 Great Works of Russian Literature I promised myself I'd tackle starting last year (only 10 more to go!).
This year's most renown work of crime fiction, Steig Larsson's "THE GIRL WITH THE DRAGON TATTOO" is one that can be seen in more airport, poolside and public park hands than any book since "The Da Vinci Code" - which alone gave me pause initially, and guaranteed that I wasn't going to chase it down until a friend or two told me I had to. No one I trust ever said anything about "Da Vinci Code". Of course, this book is not a "this year" book; it was written in 2003-2004, right before its then-unknown author died of a heart attack, long before knowing how famous he'd become or how lucrative his estate would ultimately be. It was ultimately and posthumously published in his native Sweden in 2005. It's the first of a trilogy of books, all of which are bazillion-sellers now and are being made into Hollywood films. As soon as my wife finishes this particular book, which she's reading on my urging now, we'll watch the Swedish-language film adaptation of "The Girl With The Dragon Tattoo" on Netflix posthaste.

This is one book I'm pretty sure a good percentage of the folks reading this post have already tackled themselves. So - what did ya think? Though I have a few misgivings, you can put me solidly in Larsson's corner, and chalk me up as one who'll eventually join the herd in reading "THE GIRL WHO PLAYED WITH FIRE" next. I won't give any spoilers here. I will tell you that the subtext of the breezy, quick-read (yet still intelligent and mostly well-paced) book is violence against women. Ghastly violence at times - and yet, in the redemptive female character Lisbeth Salander, a female heroine who pretty much saves the day, and exposes (or defeats) the forces of Swedish darkness. These forces of darkness are sex criminals on one hand, and predatory evil capitalists on the other. The book is set up for you, in time, to adore Salander, this tatooed punk hacker who rides a motorcycle, has Asperger's syndrome and hates just about everyone. I thought it was corny when I first heard about her, before I'd read the book - now I'm markedly impressed with how Larsson pulled off such a strong balancing act with his particular character.

"The Girl With The Dragon Tattoo" starts slowly and relatively quietly, and takes about 200 pages to build up to a shocking act of depravity - stangely, one barely related to the rest of the narrative - that kicks the entire book into gear. Investigative journalist Mikael Blomkvist is the centerpiece of this section, as he is the book's final 70 pages - a tacked-on section that I can definitely see as being perceived as superfluous to the book by many. He teams up with Salander - and eventually becomes her lover of sorts as well - in the process of solving a murder for which he's been paid to research. He only gains true ground in what looks to be a hopeless task when Salander fully enters the picture - and then it's off to the races, and the pulse and the pace quickens in that I-don't-want-to-put-this-down manner that's the mark of a great escapist read.

I think Americans find extra enjoyment in this book because it's so foreign in its Swedishness, full of in-jokes about Olaf Palme, Gamla Stan and Sodermalm, and real towns like Kalmar, Ronneby and Karlskrona (all three of which I'm proud to say I've visited in 2001, when I was employed by Vodafone and was lucky enough to travel to Sweden for work). But "The Girl With The Dragon Tattoo" is a worldwide hit because it's good - just a flat-out good crime novel, with a few extra bits of oddity (like Salander) to make it a strong cut above the norm. If only I knew what the norm was.
Posted by Jay H. at 6:00 AM