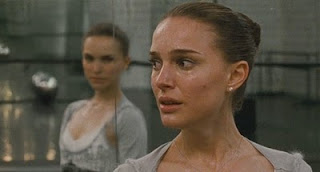 I’ll just cut to the chase. This is absolutely my favorite film of the year, and it’s also the best film Darren Aronofsky’s made – and I’ve seen them all. My wife and I got hooked into his unique, jarring filmmaking vision when his first film, “PI” hit the theaters in 1998 (Wow! That long ago!), and of course that was followed up with his best film of the previous decade, the bleak and unrelenting junkie saga “REQUIEM FOR A DREAM” (2000). Even his least-seen and most-panned film, the otherworldly and ambitious time-spanning drama “THE FOUNTAIN” (2006) was so far-reaching and well-crafted that it was easy to overlook its considerable flaws. I still dug it. Oh, and of course there was “THE WRESTLER” (2008), which deserved every kudo it got.
But I'm only exaggerating slightly when I posit that these are all student films compared to “BLACK SWAN”, which hit near-perfect notes in tone (dark, mysterious and creepy – in a film about ballet!), picture (a washed-out 1970s look that reminded me a lot of “THE EXORCIST”), story (an ambitious parallel of “Swan Lake” in which a virginal “white swan” sort of girl does whatever it takes to transform herself into a murderous, ultra-sexual “black swan”) and acting (Natalie Portman, who is on screen every second of the film, is amazing). Let’s go back to that “Exorcist” comparison. Do you remember how that film, even when it took place outside, still felt underlit and ominous? “Black Swan” keeps the lights dim in every scene – inside it’s always candlelight or a lone bulb on, or harsh fluorescent light that still feels incomplete and uncomfortable. Outside, it’s always overcast and bleak. Aronofsky heightens many scene with a abrupt, bouncing shaky-cam, and close-ups that make you feel like something’s going to pop out of someone’s face at any time. Sometimes something does.
“BLACK SWAN” is a psychological thriller-slash-horror film that concerns a fragile, girlie-girl wisp of a young woman who still lives with her (overbearing and jealous) mommy, and has puffy stuffed animals on her bed. Her dancing talent and virginal perfection makes her an easy match for the “white swan” role in the NY Ballet’s production of “Swan Lake”, but the role is for both parts – white and black swan. She needs to convince, please and possibly even sexually favor her director, a great leering letch of a Frenchman played by Vincent Cassel who thinks she’s too uptight and repressed to be the Black Swan as well. She certainly is. Portman, completely priming and training herself for this moment for her entire life, will do whatever it takes to get this part, but simply doesn’t know how to become something that she’s never been. Confusing things is a liberated, sexually free lithe & limber rival dancer played by Mila Kunis, who threatens to snatch the hallowed part away, while simultaneously reaching out to try and loosen Portman up. Roofies are eventually consumed.
I’m not giving much away by saying Portman does get the Swan Lake role of her dreams, even before the halfway point of the film. And her transformation begins, and it’s a hell of a ride. It isn’t often that I see a film and immediately make plans to see it again, but I did this time, and I hope to shortly be gripping my proverbial seat again.
Posted by Jay H. at 4:34 PM