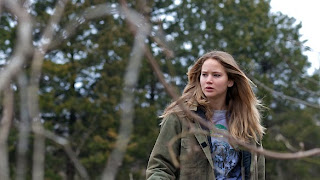 This stark, thrilling American indie film has gathered accolades from pretty much all corners, and recently came out on DVD – or download – or whatever it is we do with films post-theater run these days. “WINTER’S BONE” will likely be picking up some hardware at the upcoming Golden Globes and Oscars; I’d certainly give newcomer actress Jennifer Lawrence (“Ree”) and her Uncle Teardrop, played by John Hawkes, a nomination – as well as the cinematographer who picks up the bleak, sweeping Ozark mountain terrain in a way that makes it feel claustrophobic and completely self-contained. Director Debra Granick probably deserves a nomination as well.
The story concerns 17-year-old Ree’s search for her missing meth-cooking father, who has skipped out on probation and has therefore caused Ree’s absolutely dirt-poor family to be threatened with eviction from the near-shack they call home deep in the woods of the Ozarks. This is a land portrayed as almost completely removed from the rest of America as we know it. The only connection we see to the outside world are the Army recruiters trolling the local high school, who seem to be the lifeline that might take Ree and anyone else with any smarts out of this violent, desolate place. Otherwise, this is a land of missing teeth, thick accents, pickup trucks and people who shoot, kill and skin squirrels for dinner. At no time does “WINTER’S BONE” turn into stereotypical white-trash-on-parade. While some people in this forgotten slice of the country are sympathetic and helpful to Ree’s plight, most are sick, secretive and violent people, many of which are part of her extended family. Because she’s tough as nails and doing the work of two adults (her mom has been driven mute and crazy) raising her two younger siblings, Ree has to have an absolutely iron will and ability to withstand unimaginable pain and terror in order to protect herself and the two young kids.
“Winter’s Bone” plays out more like a thriller than it does a bleak drama, since violence can and does erupt at any moment. Yet it's not a complete horror show - there are moments of tenderness, and long, quiet shots of bored children at play, that are quite touching, if I may say so. As she searches the Ozarks for her dad, Ree encounters the drug-ingesting, drug-dealing scum of the earth who’ll do anything to keep her from finding him. Jennifer Lawrence is a true talent who I imagine will be made into a star within the next two years – she’s pretty enough to be the lead in romantic comedies, and a fantastic enough actress that she can also knock it out of the park in gritty films like this one. Definitely pick this up if you see it at the video store, which of course don’t really exist anymore. Or just download a rental copy here.
Posted by Jay H. at 6:00 AM