A TRIP TO BIRCH AND BARLEY, WASHINGTON D.C. 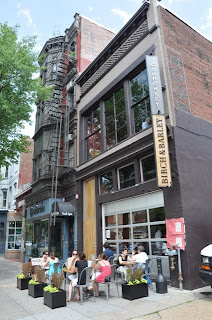 I hadn’t been “inside the Beltway” in a few years, and took the opportunity I was given to head to the much-loved CHURCH KEY bar in Washington DC’s Logan Circle area to get down with some top-quality beers. Yet I was hungry as well, the way a man often gets. I decided therefore to dine at the downstairs portion of this bar, which is a full-service restaurant called BIRCH AND BARLEY, and order my drinks to be brought to me by a barmaid from upstairs. Or, as actually happened, by my male waiter, an Aaron Goldfarb lookalike who happened to know just about everything about the Mid-Atlantic beer scene and then some. We got to talking, and he helped steer me in the right directions, both food- and ale-wise.

Let’s start with the food. This is a classy dining establishment, with prices to match. The food more than holds up – this was absolutely one of my favorite meals of the year, and easily beats my previous best good-food-and-great-beer establishments, LA TRAPPE in San Francisco and THE PUBLICK HOUSE in Boston. BIRCH AND BARLEY make their own amazing breads, including this incredible pretzel bread that they brought me gratis on a board with hand-churned butter that I could have eaten two loaves and five sticks of. I ordered this sumptuous Ahi Tuna appetizer that was amazing, followed by a “Cioppino” and whole fish that was salted & roasted to perfection. When I’m traveling for work we get a certain stipend to use on our three square meals per day, but I blew mine out of the water on this meal alone ($26 entrée, for instance). I cared not a whit, and at the time was willing to go into debtor’s prison to do so.

Yet this isn’t a food brag blog, nor will it ever be one. On to the beer. There were so many fantastic untried beers on the menu that I had to go with their 4-ounce tasters in order to try a bunch I’d never had and not walk out of there clutching my templates and falling down in the snow. These were generous 4-ounce pours as well, closer to 5 or 6, which only heightened my adoration for this place. Here’s what we tried: 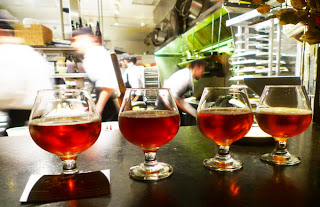 NOGNE Ø – “TIGER TRIPEL” – What a fantastic tripel – and from Norway, no less. Dry and fruity, with a meaty and muscular backbone. Excellent. 9/10.
JOLLY PUMPKIN – “NOEL DE CALABAZA” – A strong dark “winter” ale from this Michigan brewer. Sour, and a little bourbony. Super-dry finish. One of their best beers of the half-dozen I’ve had, which still puts it at only a solid 7/10.
FOUNDERS – “BREAKFAST STOUT” – Oh yeah. This was finally my first try of what’s considered one of the US’s world-class beers. Delicious, clean, coffee roasted taste in a premiere coffee beer that’s perhaps the best I’ve had in an increasingly crowded field. Very special, and I very much like that it is in small bottles. 8.5/10.
STILLWATER BREWING - “EXISTENT” – Let’s hear it for the locals! This comes from up Maryland way, a tasty strong dark ale (branded as a saison??!?) that doesn't come on too strong but still packs lots of smooth flavor. Decent. 7/10.
VICTORY BREWING – “PURSUIT OF PALE ALE” – Aromatic and hoppy, but blah - a little too chalky, and to use my catch-all dis, “almost macro lager like”. Zing! 4/10.
MIKKELLER/BREWDOG – “DEVINE REBEL 2010” – The 2009 version of this barleywine was one of the best beers I drank this year, but alas, this is too strong and not as fun as the last one. Wow, bring on the booze you guys, why dontcha? 13.8% alcohol, and despite sweet caramel and nice stinging hops, it’s really a little much. 6.5/10.

This was an epic session that I hope you enjoyed reading about, and I pray that you pick this as your go-to meal or drinking spot (forget the overrated BRICKSKELLER) next time you’re in the Nation’s Capital.
Posted by Jay H. at 6:00 AM