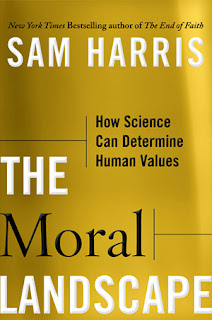 The first of the big three “proud atheist” books I read was Sam Harris’ excellent “THE END OF FAITH” from 2004, a book that I reviewed here, and then added some thoughts to here. That led me to Christopher Hitchens’ “GOD IS NOT GREAT”, and once I’d completed that, I was pretty much done with atheist books and had no need for Richard Dawkins’ “THE GOD DELUSION”. Nothing like preaching to the converted - pun very much intended. I was very excited to see Harris’ big follow-up “THE MORAL LANDSCAPE” hit the shelves several months ago – an argument for how science can help mankind solve moral and ethical dilemmas, rather than religion. Yet after completing it, I found it to be a book-length explanation of an idea that could have easily been a nice essay in The New Yorker or The Atlantic or something, and came away somewhat frustrated that I’d squandered so much time on it, as happens when one reads an unsatisfactory book all the way through.
It’s not that I don’t agree with Harris’ central thesis nor his ideas, not at all. The book is a somewhat rambling defense of the fact that science, in the form of prove-able hypothesis of brain activity and scientific studies of how human beings define “things that are good and right” in their brains, is approaching a moment in history where it can rationally settle moral arguments about what is good/bad for humankind. This is something that we’ve left to religion for millennia – “murder is bad because the Bible says so”; “thou shalt not commit onanism because a priest said so” and so on. We haven’t completely overcome this, of course, but Harris rightly envisions a time when science should be able to tell us what we ought to do to live the most fulfilling and rewarding lives possible.
Yet the book needlessly seems to be written completely on the defensive, despite what to me is pretty straightforward and exceptionally reasonable on its face. Harris spends the first half of the book essentially making the same points in dozens of different manners, always coming back to the central thesis. Like I said, I could have seen this make for a terrific article, but I wouldn’t recommend that you cuddle up with this for an intense week of reading like I did. I didn't learn a whole lot, and unlike his last full-length book, wasn't left with a new arsenal of argumentative firepower to use against the forces of darkness and unreason.
Posted by Jay H. at 3:30 PM