THE GREATEST 20-MINUTE ROCK SONG OF ALL TIME 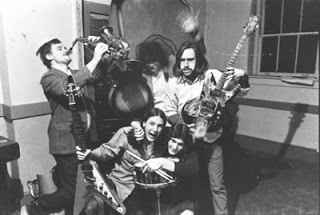 It’s a very short list, actually. There’s the HAMPTON GREASE BAND’s “Halifax”, and then there’s everything else. How did I come to worship this epic-length, multi-part guitar onslaught/Southern-fried Zappa boogie barnstormer? It all started with CLAW HAMMER, a band that I called my favorite in the early 90s and whom I befriended around that time as well. I was their road manager on a North American tour in 1993, and among the many bands they turned me onto via the tape deck during those six weeks (embarrassingly, I had barely heard BIG STAR before this time), it was 1971’s HAMPTON GREASE BAND that rang the most true to my still-forming rock and roll consciousness. Claw Hammer had copped quite a few moves from this barely-heralded Atlanta band, and because of the Grease Band’s exceptionally low profile in the interregnum, there really wasn’t anyone to call them on it – so they very proactively offered up their thanks, praise and the wearing of this influence on their proverbial sleeve by covering the band’s “Hey Old Lady & Bert’s Song” on their first album.
It’s “Halifax” that I come back to the most, however. It opens the Hampton Grease Band’s only record, a double album called “MUSIC TO EAT”, in spectacularly non-commercial fashion. In 2004, I wrote this about “Halifax” on my old blog:

“….just may be the single best 19 minute, 42 second song ever created. Ostensibly about the city of Halifax, Nova Scotia, rumor has it that the band selected it based on the old blindfolded pin-into-the-map trick. The lyrics read like a combination Canadian travel brochure/history lesson created over a bongload of really good weed, and they're delivered in the exceptionally bent jester/pirate/mad scientist voice of Bruce Hampton. Song cycle-loving Johnny- and Jill-come-latelys such as my favorites the FIERY FURNACES are still learning from the twists and turns this number takes. It's a good 7 or 8 killer songs wrapped up in one, full of frantic fretboard runs, an outrageous stop-start guitar solo, loads of homegrown Beefheartisms, and a heartbreaking melody at its start and finish. It's a frostbitten sea shanty for the ages, and I'll play it every 3 months on my headphones until I die”.

I fully recognize it’s not for everyone. The band says in the posthumous liner notes for the “Music To Eat” CD that their record was the second-worst-selling product ever put out on Columbia Records, after a yoga record (!). Even Captain Beefheart fans, whose numbers are multiplying after the man’s recent death, may find “Halifax” too fusion-y, too long, too wacky, too obtuse . Me, it’s one of my favorite songs of all time. I’ve posted it for you to listen to and download here.