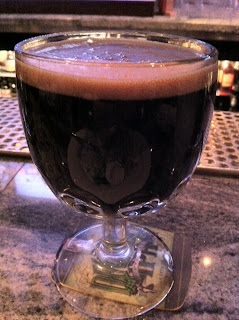 I went especially out of my way to imbibe a glass of DESCHUTES BREWERY’s perennially fetching imperial stout “THE ABYSS” a couple of weeks ago. To be honest, I’d do just about anything to drink what has become one of my favorite beers ever created. I was in Las Vegas for work, I was sick with a cold and totally run-down, and yet I remembered the time in early 2009 when I went to Mandalay Bay’s restaurant “The Burger Bar” and they had a fresh keg of 2008 ABYSS on draft. On draft! I hopped in a cab, full of blind faith that the same restaurant/bar might actually have this beer again two years later, only a week after the announcement went out that ABYSS 2010 was being shipped to bars and bottle stores across the USA.
Well, yeah – they had it. And it was amazing, of course. Some people have talked about past batches of this beer being “infected”, like the 2009 version that I reviewed here and rated 9/10. If that’s infection – baby, infect me. ABYSS 2010 comes on strong with a thick-foam creamy taste, and more so than last year’s, has a rich chocolate taste as opposed to the more espresso-black, bitter coffee taste of its predecessor. It’s a beer that’s already reached legendary status only a few years after it first hit the market, and I implore you to try and land a bottle (at least) during the next 4-8 weeks they’ll be available. After that – well, there’s always next year. 9.5/10.
Posted by Jay H. at 6:00 AM