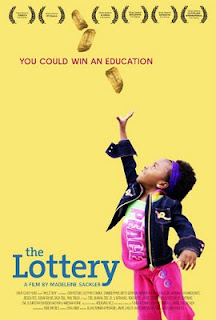 2010 was the year that "my side" of the debate over how best to educate America's children began to be articulated in places beyond libertarian and conservative echo chambers, and strangely enough, it was a series of movies that seemed to move the debate the furthest. I still have not seen the much-heralded "WAITING FOR SUPERMAN", made by the same folks behind the Al Gore global warming scare film "An Inconvenient Truth", but it was the topic du jour among many of the liberal parents we know well & whose kids our son goes to public school with. All of a sudden it became OK in 2010 for Democrats, "normal folks" and the like, to say questioning, skeptical and even disparaging things about teachers' unions and the stranglehold they have over the declining state of American government-run schools. That film, along with the unceremonious forced resignation of DC School superintendent Michelle Rhee, a hero to many across the political spectrum for her no-nonsense stand against educational bureaucracy business-as-usual, seemed to have helped push many former agnostics into the school choice/radical school reform camp. It's about friggin' time.
For the small number of people who saw "THE LOTTERY", which I enthusiastically watched several weeks ago along with a lesser school-choice documentary called "THE CARTEL", the sides are obviously very clearly drawn. This is a masterful documentary that focuses on the school enterprise zones that have been tentatively set up inside of Harlem, New York City, as well as the desperate parents looking for any kind of alternative to the dead-end public schools their children are "zoned" to attend school in. Every one of these parents is African-American, and they are strivers, several of whom had zero opportunities of their own growing up in the same exact neighborhoods, and they see wasted lives of crime, illiteracy and menial work for their children without an alternative to the stultifying schools that the educrats would otherwise choose to force their kids into.

Thanks to forward-looking programs pursued by Mayors Giuliani and Bloomberg, and through the efforts of educational choice superstars like Geoffrey Canada and Eva Moskowitz, Harlem has a series of charter schools that emphasize educational rigor and straight-up results. They don't emphasize tenure, teacher grievances and the bloating of administrative staff - these are for-profit schools that must demonstrate results for a long-neglected, very poor student body, or they will unceremoniously lose their charters. Parents, naturally - but perhaps surprisingly to white liberals who once thought that school reform efforts was being run by greedy Wall Street Republicans and their fat cat friends - are desperate to get in, but they must undergo a lottery, since the demand for the few slots is so small.

The film follows these four families as they try to wend their way through the process of getting into Moskowitz' Harlem Success Academy, along with hundreds of other families who'd love to find a way out of Harlem poverty for their children. This school and others like it in the district are profiled, and it's dumbfounding for me and for many of the parents to see the schools' own ambitious charter writ so clearly, and in such marked contrast to that of most government-run schools - To get every child in the school into college. Period. Whatever it takes. In low-income, African-American Harlem this is a big deal, and you desperately root for each family as you learn more about the schools and families themselves.
Of course, the neighborhood activists and the teacher's unions are none too pleased. Randi Weingarten, head of the American Federation of Teachers, mouths the usual do-nothing status quo platitudes, and various protesters-for-hire from Acorn (Acorn!) are bussed in from other parts of the east coast to do her and her cronies' bidding. The director of this film, Madeleine Sackler, is obviously trying to shine a light on just how obstructionist the keepers of the status quo can be to helping ambitious families from getting a quality education for their children. After all, one chink in the armor of the government-educational complex and that might be enough for the whole thing to come tumbling down. It might actually (gasp) introduce competition, experimentation, the profit motive, the ability to fire bad teachers, the ability to shut down bad schools, the ability to do away with one-size-fits all "teaching to the test", and so on. This is anathema to those holding the keys to the complex, and it's one big reason why more than half of the African-American boys in the United States aren't graduating from high school.

Not all of the families in "THE LOTTERY" actually win the lottery. It's heartbreaking for the ones that don't. I thought this was a terrifically-paced documentary that should pick up thousands of new converts to the good fight, and as well it should.
Posted by Jay H. at 9:52 AM