“EXIT THROUGH THE GIFT SHOP” 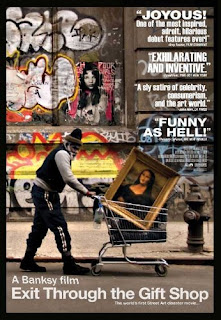 I’m about as big of a fan of “street art” as I am of golf, but I’d heard over the past year that “EXIT THROUGH THE GIFT SHOP” was a great nutcase of a documentary, a real con job that proceeds like a straight-up doc, yet has you wondering until well after the end if you’re the one being played. It concerns – and was likely conceived by – the British street artist Banksy, an admittedly very talented artist whose canvas happens to be public and private buildings and spaces, as well as the crew of quote-unquote artists who are also practicing this graffitic form. Actually, though, it’s really about a hanger-on who follows these guys around, a Los Angeles-based Frenchman named Thierry Guetta.
Guetta starts filming all the modern players in street art culture – the guys who, in the dead of night, hang “Andre The Giant Has a Posse” posters and the like all over cities like Paris, San Francisco and New York – and in the process, realizes that he has enough material to make a documentary on it. But he’s a total boob, a sycophantic imbecile – a funny guy with a big heart, sure, but who has a camera and a ton of raw footage and no idea how to put it together. After he gets the reclusive and world-famous Banksy to agree to be filmed, he decides that his mission is complete, and he can assemble all of the footage together into a true documentary. Banksy sees his absurd finished product, however (a product I don’t believe actually exists), and decides to instead start documenting the rise of Guetta himself, who has himself decided to become a street artist, and who copies the work of all of his street idols.
Here’s where it gets interesting. What’s not in dispute is that Guetta renamed himself Mr. Brainwash, or MBW, and actually got a real cover-story feature on his art shenanigans in the LA Weekly. Mr. Brainwash also had a real art installation at an LA warehouse, where his derivative and imbecilic artworks were seen by thousands, thanks to the LA Weekly cover feature. What I’m fairly certain of, after watching this excellent film, is that the entire process – this documentary, the Mr. Brainwash art show in LA, "Mr. Brainwash" himself – were conceived, managed and filmed by Banksy, as a prankish way to make a sideways statement about the co-optation of street art by the mainstream. That’s it. And while that “statement” might seem pedantic and trite, this film is anything but. It’s a total hoot. Hedonist Jive says check it out.
Posted by Jay H. at 5:05 PM