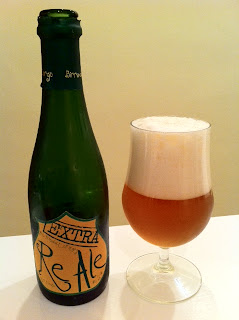 Been hearing a lot about “Italian craft beer” the past couple of years? I don’t blame you if you scoffed. Is there anything more dejecting that going to a nice Italian restaurant, deciding that you want to forego wine (as you often do), only to find “Peroni” and “Moretti” as the only choices on the birra part of the menu? Mamma Mia! Well, in preparation for my first-ever trip to Italy in a few months I decided to get on the Italian craft beer bandwagon in a hurry. When I was at EATALY in New York City last month, I had the opportunity to buy a couple of Italian imports that I’d never seen before, and that are most definitely pretty hard to come by in the US of A.

The first of the two I stashed in my suitcase is from the Italian brewer I've read the most about - BIRRA DEL BORGO, from Borgorose, Italy. Their EXTRA RE ALE is outstanding. It's nearly the perfect cross between a Belgain tripel and a souped-up American IPA, with all the yeasty zestiness of the former, and the bright, hoppy character of the latter. It's even a little soapy, and it comes off as a good thing. Loaded with flavor and mouth-tingling yeasts, and super aromatic to boot. It's as good as anything from Northern Europe, Old Europe, New Europe, you name it. A real find. Birra Del Borgo Extra Re Ale - look for it on your grocer's shelf. 8.5/10.
Posted by Jay H. at 8:43 PM