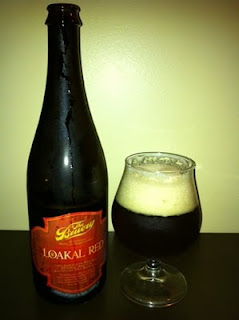 If my paltry Twitter following is any indication, those of you that do choose to follow @jayhinman are mostly interested in the beer talk, judging from the many @beerguy23 and @thebrewdudes and @sudsluver "follows" I've got going on. So I'll give you what you're looking for, my friends. It's either a new batch of beer reviews, or some more books about North Korea & atheism. Wait, what's that you say? I thought so. Here goes:
THE OUTSTANDING
DOGFISH HEAD - "BURTON BATON" - These just started showing up in the San Francisco Bay Area the past couple of months. I'd had it before, even reviewed it before, but loved it more than ever. It's an oaked IPA - yeah - and it truly has hops and oakiness held in perfect balance. Warm and comforting and just a pleasure to behold (and drink). 9.5/10.
THE BRUERY - "LOAKAL RED" - (pictured above) First, I can't thank Rational Realist, a.k.a. The Beer Rover, enough for procuring this beer for me. He had to snatch it from some local store in California's Orange County and then bring it back to his domescile in San Diego before sending it to me. A true patriot and hero. It's a delicious oaked red ale. Tastes like toffee, almonds and the inside of an oak barrel, along with some citrus at times. It has an amazing, relaxing smoothness to it, and I made this my New Year's Eve ale and all was right at the tail end of 2010. 9/10.
UNIBROUE - "TRADER JOE'S VINTAGE ALE 2010" - Clever beer punters know to pick one of these up every year - it's Canadian beer maestros UNIBROUE masquerading as a Trader Joe's house brand. It's soooo good this year. Man. Sweet molasses and brown sugar, and a little smokiness makes its way in the strong flavor. 9% alcohol and packs a mean punch. Totally fantastic strong dark ale. 9/10.
TWO BROTHERS BREWING - "THE BITTER END" - Had this once before, reviewed it on my blog even, but returned to Spitzer's Corner in New York City again just to make sure the first time wasn't a fluke. It wasn't. An incredibly drinkable pale ale with a liberal dose of hops, and if it was bottled in my home area I'd call this my go-to "weeknight beer" from now on. 9/10.
BOULEVARD BREWING - "BOURBON BARREL QUAD" - Ahh, now this one was a real beast, a nearly 12% ABV quadrupel-style monster from Kansas City that's malty, sweet and lightly boozed. Maple, spice and bourbon. Really exceptional, as we've come to expect when this brewery goes big as part of their "Smokestack Series". 8.5/10.
THE VERY GOOD

THE BREWER'S ART - "GREEN PEPPERCORN TRIPEL" - I'm not even sure how to look for a peppercorn in a beer, but man this is a really, really good one. 9.2% alcohol with an immense yeasty, citrus tang. Very juicy and sweet with slight bitterness. Lemon juice. Hops. An excellent aftertaste that lingered til I went to bed with dreams of another one of these in my future. 8/10.
FREE STATE BREWING - "OATMEAL STOUT" - Enjoyed this on tap in Overland Park, Kansas during a recent business trip. A really silky oatmeal stout with a great chocolate aftertaste. Better than most of these by far, and a nice wake-up call for me to this Kansas-based brewer. 8/10.
AUBURN ALEHOUSE - "PU240 IMPERIAL IPA" - Picked up this bomber of big brassy imperial pale ale on a whim, and I'm mucho glad I did. Piney and very strong double IPA, smooth but quite aggressive. Great discovery. 8/10.
AVERY BREWING - "IPA" - Yeah, just your basic no-frills IPA from Colorado's Avery Brewing, and like everything they touch, it's better than most everyone else's. 7.5/10.
SAMUEL SMITH - "YORKSHIRE STINGO" - Was I a little disappointed in this ale, despite my high-ish score? I was, I was. Draft Magazine gave it their highest-ever score of 100 points, and annointed it a 21st Century masterpiece. Me, I liked it - quite a bit - an "old ale" that tastes like it, with hints of stwed fruit, plums, oak and maybe  - just maybe - even a little figgy pudding. 7.5/10.
STILLWATER ARTISINAL ALES - "CELLAR DOOR" - Big-tasting wheat/farmhouse/saison that has an equally huge aroma - must be the sage in the mash. Yeah, I think I do really taste the sage in this (drinking it as I write this post). Clear, highly carbonated and tasty - and like their other two beers I've tried, not enough to seperate as far from the middling herd as I'm sure they'd like. Still a work in progress. 7/10.
GRAND TETON BREWING - "PURSUIT OF HOPPINESS" - A dry imperial red ale, way more malty than hopped-up and one that can easily be "chugged" if you're so inclined. A brown caramel beer with a strong wheat backbone. Not one half bad. 7/10.

PRETTY THINGS - "ST. BOTOLPH'S TOWN" - A big, malty and bitter brown ale from one of my new favorite American brewers. Tastes of sour cherries and smoke, with a bit of a bite. It's something to be considered and not slammed, and unlike the Two Brothers Bitter End I drank right before it. 7/10.

WYCHWOOD BREWERY - "HOBGOBLIN" - You've probably seen the tap handle for this English brown ale, it's got a weirdo looking goblin fella on it, very ornate & with warts on his face. Bravo for that. The beer, hmm, well - it's OK. A fruity, plum jam-like brown ale that I enjoyed whilst it was in my hand, but still scored a 6.5/10.

BOUNDARY BAY BREWING - "CABIN FEVER" - One of my favorite brewpub experiences was visiting this Bellingham, WA brewery in the late 90s - amazing food, amazing beer, cool chuggin' hippie band playing, and just a great vibe all around. Tried their winter beer this year and could not recapture the vibe. Tons of flavor (caramel and burnt sugar, mixed with booze), with alcohol very apparent. Supposedly only 7% ABV, and unfortunately something of a mess. 5.5/10.
TENAYA CREEK - "HEFEWEIZEN" - (pictured here)  I have to go to Las Vegas every January for work, and every January I try a different Tenaya Creek beer with middling-to-poor results. Not surprisingly, this is really basic, over-carbonated and watery. Few discernible tastes outside of the faintest whiff of a German hefeweizen. 5/10.

BIG TIME BREWERY - "PERSPECTIVE IPA" - I used to frequent this Seattle brewery when I was in grad school up there, and tried this on draft during a recent visit. Didn't like it. A light-bodied, chalky IPA that coats the back of the mouth with its foul chalk dust. No thanks. 4.5/10.

TOO BIZARRE TO RATE

STONE BREWING - "VERTICAL EPIC 10-10-10" - Have you tried this one yet? I have an unopened bottle sitting downstairs, and after the glass I had the other night, it might stay there forever. Is it wine? Is it a Belgian-style beer? An IPA? A white wine Belgian IPA? I could not get a handle on this to save my life - so I'm going to just postpone any bashings until I bravely go for that bomber sitting downstairs and work on my description a little better. This might be a masterpiece for all I reckon, much like how truly great art is usually recognized years after the fact. Right? Right?
Posted by Jay H. at 7:47 PM