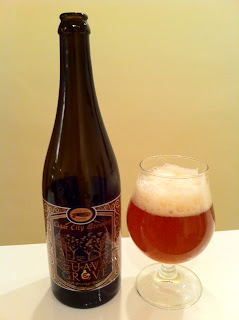 This is one of those “suitcase beers” we talk about in this forum from time to time: a beer I purposefully dropped major coin on while traveling. and tucked between yesterday’s socks and jeans in a suitcase to bring home from a work-related excursion. I found the “GUAVA GROVE” from Florida’s newly-celebrated CIGAR CITY BREWING at the Whole Foods Beer Room in New York City. If you haven’t been to this store and you’ve found yourself in NYC the past two years – shame on you. It not only has a wide selection of rare micros and deep catalogs of the East Coast’s major craft brewers, but there are at least 4 taps from which you can partake in this liquid nirvana. Even at, oh I don’t know, 3pm – if you want to.
Anyway, CIGAR CITY GUAVA GROVE arrived in my suitcase with a fair bit of hype attached to it. It has been categorized as a saison or farmhouse ale, which I suppose I can get behind in a stretch. I’d go with “funky, yeasty sour fruit ale” and invite a new category if I could. It’s tangy. Incredibly tangy. A Belgian-style tropical fruit ale, heavied up on the grapefruit flavor, and the guava as well, I’d imagine. Very caramel/creamy and pouring a deliciously thick dark orange. It’s a flavor I will definitely remember to the end of my dying days, and well worth the double digits you’ll be spending to throw it in your bag. 8/10.
Posted by Jay H. at 6:00 AM