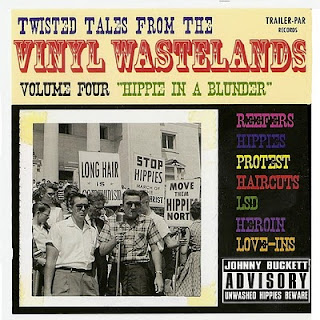 There’s a new-ish set of compilation CDs devoted to lost 50s-60s-70s novelty records called “TWISTED TALES FROM THE VINYL WASTELANDS”, put out by a label called NO HIT that appears to specialize in this sort of shenanigans. Truth be told, a lot of what they compile wasn’t considered a “novelty” at the time, but appears as mirthful to the 21st century modern man because of our refined, ironic distance from our generational forbears. I was only moderately interested in these collections when I first heard about them, until TWISTED TALES VOLUME 4 – “HIPPIE IN A BLUNDER” came out. Whoa, now here we go. An entire 33-song collection of anti-hippie songs, almost all of which were recorded in earnest and with extreme fear and loathing of the hippie threat. I needed to get involved with this CD – fast.
Is “HIPPIE IN A BLUNDER” something you’ll listen to repeatedly? I doubt that you shall. Yet you’re going to want to hear this collection of Southern-fried hippie panic at least a few times. There was a genuine backlash to our the youthful uprising going on across America in the late 60s, and as surely as it manifested itself in the Goldwater and Nixon presidential campaigns, it also showed up in country music. This collection includes multiple pro-Vietnam war anthems, like the outstanding “Ballad of Two Brothers” by Autry Inman, or another corker called “Hanoi Jane” by Leon Rausch. The southerners looked at my San Francisco brethren with a mixture of humor and disgust, and many of these songs express a contempt that’s hard to imagine in current times.


That said, LSD and “the evil dope” were pretty scary to the quote-unquote establishment at the time, and “Twisted Tales, Volume 4” includes plenty of histrionic warnings against those as well. I am hoping you’ll do what you need to to secure this longhaired platter.
Posted by Jay H. at 5:08 PM