THIS IS A TEST - SF BEER WEEK '11 OPENING NIGHT 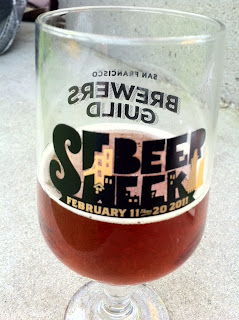 Folks, there's an axiom I've become unfortunately privy to as I've aged. Back in my late teens and 20s, this axiom went something like this - bad hangovers, even awful ones, could be laughed off, because the previous evening's festivities could be said to have been "worth it". Yet now the axiom has been mercilessly flipped. It's hard for me to imagine a hangover that would make whatever amount of beer I'd had the night before worth it. Hangovers (I'm talking bad ones, not the I'm-a-little-bit-sleepy ones I still indulge in from time to time) are never worth it. I actively avoid them. I'll dis-invite myself from an evening of revelry if needed, or volunteer to drive, or do whatever it takes to not have that queasy, head-throbbin', I'm-pretty-sure-I'll never-drink-again feeling. Last time I felt that way was after the 2009 Pacific Coast Brewing Holiday Beerfest, the one I documented here. I banned myself from all beer festivals after that - and for 14 months, I truly and sanctimoniously stuck to my guns.
Friday night, the opening night of SAN FRANCISCO BEER WEEK, was my test. 35 brewers were on hand to pour their wares, many of whom brought "barrel-aged", "rare" and "collaboration" treats to mark the occasion. I just wasn't gonna miss out on that. Thus, a test. I needed to prove to myself that I could do this thing, try some amazing specialty ales from across California, and still bounce out of bed the next morning ready to seize the day. I'm happy to report that the evening, and the subsequent Saturday, was a smashing success. I've now got my festival game face on again. The secret? Well, there are a few secrets I've learned:

1. There's nothing wrong with pouring out a mediocre beer - just don't do it in front of the brewer;
2. Drink plenty of water every half hour or so;
3. Eat a big pulled pork sandwich;

4. Follow that up with a burrito at LA CORNETA near the Glen Park BART station afterward
You do all those things and, like me, you'll be a festival warrior and a big hit with the family the next morning ("Daddy, I thought you were going to be in bed all day and ignoring us like last time"). The festival, which was held at San Francisco's Yerba Buena Center for the Arts, happened to coincide with some of the most incredible February weather ever recorded, and thus it was short-sleeves under the stars and lots of good vibes, happy people and beer flowing all night long. 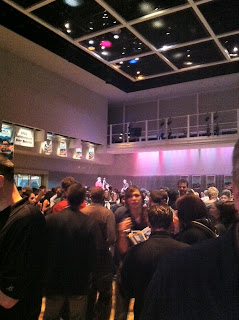 Though the crowd definitely was heavily beer-dorkified, including the usual contingent of trivia-spouting, bearded, t-shirt wearin' aficionados looking to run elbows with their brewing superheroes, there was also a large smattering of (young, attractive) women, couples on dates and grizzled beer-loving old-timers. Here's a story that sets the tenor for our craft beer-loving times: I was talking with some friends and another couple, and we noticed the pitch of the crowd behind us growing in volume, and whirled around to find a crush of humanity around one individual, with tons of cameras and iPhones being held aloft to snap a picture with this deity. We were quite intrigued. I just read that morning that a bunch a A-listers from Hollywood were in town to film all weekend, folks like Matt Damon, Kate Winslet, Jude Law and so on. Would be pretty cool if one of them deigned to "beer down" with the common people. So I volunteered to navigate the crush to see who it was. I get over there, and - oh, whatever - it was Vinnie from Russian River Brewing. Seriously. I've seen people act this way around Snoop Dogg, or the baseball player Randy Johnson when I've seen them in public, but....the Russian River guy? Wow.
You're probably wondering about the beer I tried. Yeah, let's talk about that. There were some whoppers. My only goal was to make sure I tried the debut of ALMANAC BEER CO.'s "Summer 2010 Blackberry Ale", which wasn't simply the debut of this beer but of this brewery, which happens to be helmed by my pal Damian Fagan. This evening was their coming-out party, and this barrel-aged fruit beer, a Belgian golden ale with some saison characteristics, was excellent, and was completely gone before the halfway point of the night. I decided, given the circumstances, the crush of humanity and the inability for careful critical consideration, that I'd rate everything with a plus, two pluses or no plusses at all. Here's the rundown:


DOUBLEPLUSGOOD
PLUSGOOD
NO PLUSSES (which doesn't necessarily mean bad)
So we're off to a good start for SF Beer Week, a series of events I've barely participated in before due to reasons aforementioned. Tonight's an "up and coming brewers" event that I'll be very much in attendance for. Report and ranking shall be forthcoming.
Posted by Jay H. at 3:28 PM