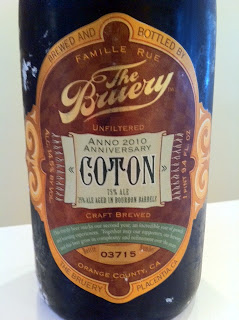 I figure you’re an important person in a hurry; so am I – so – wheeee – let’s take a brief glimpse at a set of beers that Hedonist Jive encountered over the last six weeks & see what we make of ‘em, OK? You’ll notice that we chose pretty well these past few weeks, as almost everything I was lucky enough to imbibe landing in the upper two quartiles. We’re pretty tough graders around here, too. Let’s meet the beers of mid-Q1, and find out just what in tarnation is going on with them.

FIFTY FIFTY BREWING – “RED IS THE NEW BLACK IPA” – This Truckee, CA brewer is so far ahead of the curve that they’re not only already done with black IPAs, an annoying trend most brewers are just picking up on, they’ve created my favorite drink of 2011 so far. I know it’s bothersome when beer reviewers rave about something you can only get on draft at a tiny brewery hundreds or thousands of miles from your home – but hey, would ya rather I keep this information to myself? Who knows, maybe your travels will take you to the mountain town of Truckee before you know it. If it happens, do whatever you need to do to taste this incredibly balanced and spicy IPA. There are few beers that make the mouth water just from thought alone – this is one of them. A hoppy crimson magical blend that we’re gonna call a 10/10.

THE BRUERY – “COTON” – Certainly one of the most intensely boozy ales I’ve ever consumed, tipping the scales at 14% of its volume in alcohol – and yet another spectacular triumph from The Bruery. Exceptionally balanced “old ale”, perfect for dessert, redolent as it is in sweet caramel, brown sugar and dried fruit. Had heard that some folks didn’t like this one too much, but there’s really nothing I can find fault with in this near-perfect elixir. 9/10.

SOUTHERN TIER – “HEAVY WEIZEN” – It has been well over two years since I had my first wonderful bottle of this, and I still have yet to try or even find another “imperial hefeweizen”. It I had, it almost certainly would be a pale shadow of this beauty. A full-bodied, creamy, sweet and hot 8% ABV hefeweizen – something truly unique and special, and just as amazing as it was in 2008. 9/10.

CLOWN SHOES BREWING – “HOPPY FEET” – I’d been wanting to drink a beer from CLOWN SHOES BREWING just on name alone, a name which strikes me as only slightly less ludicrous than “Ska Brewing”. This first one I’ve downed from them is a stone-cold winner. Hoppy Feet is a black IPA with an overwhelming foamy head. Hoppy, and with a malty caramel taste to beat the proverbial band. Best non-yellow/orange IPA I think I’ve ever had. 8.5/10.

BROUWERIJ VAN HONSEBROUCK – “BACCHUS” – Bought this Flanders red ale completely blind, with no information going in, and came out of ingesting it a happier and overall much better person. It’s a chewy amber-brown sour ale, with a heavy maltiness and tastes of cherries and woodiness. Absolutely delicious. 8/10.

EL TORO BREWING – “WHISKEY CHIP STOUT” – Well how about this one. The brewer that everyone from the 1990s knows as “those guys who make Poppy Jasper” are still kicking, and have brewed the best beer I’ve had from them. Check this out – it’s a whiskey stout that has less than 6% alcohol, and yet retains virtually all the flavor of a big barrel-aged stout. You sacrifice some body to get it to taste this good, but none of the flavor at all. Well played! 8/10.

SIERRA NEVADA – “ESTATE HOMEGROWN WET HOP ALE” – Ever eaten out the inside of a hop cone? Neither have I, but this might be what that’d be like if said activity could be made to be pleasurable. Very smooth, absolutely bursting with hops and pine resin. Totally refreshing and challenging at the same time - what a fresh hop ale should taste like. 8/10.

MISSION BREWERY – “SHIPWRECKED DOUBLE IPA” – Really impressive piney, resiney, big IPA from San Diego. The backbone is totally rocking on this thing, with the hops, large and up front as they are, still taking a sit-down compared to the big juicy malts. This is a nice fine and definitely worth dropping a few (not many) clams on. 7.5/10.

EL TORO BREWING – “EXTRA HOPPY CITRA POPPY” – The “citra” hop is hot hot hot this past year, and EL TORO are riding the lightning with this amber ale/pale ale combo that has a sharp bite. I dig it. They nailed it from many angles – maltiness, smoothness, fruit-forwardness and refreshingness. I reckon I need to pay more attention to this brewer’s tap-only stuff. 7.5/10.

STONE BREWING – “VERTICAL EPIC 10-10-10” – Careful readers may recall we tried (and failed) to review a draft version of this “controversial” curveball beer here. This time we enjoyed a bottled version, and thought it was great. Imagine a Belgian IPA crossed with a really yeasty champagne, and you’re getting sorta close. White grapes, hops and things that come out of barrels. All good. 7.5/10.

SIERRA NEVADA – “GLISSADE” – I can’t remember the last time I asked the barkeep for a maibock, but this was on draft at a restaurant we visited in Truckee, CA and I couldn’t keep ignoring it as I had been the past x number of months. It’s very much a “spring ale” with faint hints of pilsner malts, light and very fruity and crisp. Done really well, and something I’d drink 100 times over Sierra Nevada’s standard-issue pale ale. 7.5/10.

THE BRUERY – “HUMULUS SESSION ALE” – A 4.5% “session” ale from THE BRUERY, a superb brewer who generally brews big or not at all. And not a surprise, but this pale ale is really, really good. Super grainy and quite bitter, with radiant hops and loads of flavor. Drink six, and walk out feeling like you’ve only had three. 7/10.

ANCHOR BREWERY – “OLD FOGHORN” – It has been so long since I had one of these I wanted to see how it held up in this new decade. Well, I’d say. It’s a “lighter”, more approachable barleywine, creamy and with a distinct toffee flavor holding things in really nice balance. 7/10.

LONG TRAIL BREWING – “CENTENNIAL RED” – This is a special anniversary beer from a Vermont brewer whose wares I’ve enjoyed before. It’s a hoppy Red ale, nearly 8% in alcohol and quite malty. Has the faint whiff of distant yeasts and spices of unknown origin. Suffers a bit from a thin body, and alas, does not really pack the hoppy punch nor flavor I've come to expect from these imperial red ales of 2010-2011. 6.5/10.

MOONLIGHT BREWING – “WINTER TIPPLE” – Enjoyed this “winter” beer as February temperatures were pushing into the low 80s in San Francisco and the rest of the country was dying beneath snowstorms and extreme weather events. I didn’t like 2010’s version quite the way I have past vintages. It’s a pretty straightforward winter warmer – light, caramel-dependent and barely carbonated. Moonlight, a superstar brewer, have far more stellar creations than this one. 6.5/10.

LOST ABBEY – “DELIVERANCE” – Thankfully only sold in a little thirteen-ouncer owing to its 12.5% alcohol content, “Deliverance” is a blend of the brewery’s “Serpent’s Stout” and a brandy-barrel aged “The Angel’s Share”. Both of those beers are knockouts; this one not so much. No doubt you taste the brandy in a big way, along with chocolate, caramel and a little too much syrup. It wasn’t a bad experience, but the price-to-quality ratio was a little too skewed for me to give this any more than a 6/10.

ISLAND BREWING – “AVOCADO HONEY ALE” – This one’s been retired and put out to pasture, and maybe not a moment too soon. It’s pretty much what it sounds like, and to be fair, this Carpenteria, CA brewer almost pull it off. Avocado is light, and honey is more the story here, and it’s a very fruity and frothy and a little bit daffy. Three people tried it, no one especially liked it and we collectively bestowed it with a 5/10.

FIFTY FIFTY BREWING – “BART (Barrel Aged Really Tasty)” – Sort of sad to have to bookend this set of reviews with two FIFTY FIFTY beers, but this one’s truly as bad as the other one is good. It’s a blend of their barleywine and their overrated imperial stout (the one that sells for $23+, even at the brewery itself). Overly sweet and hot, it’s truly a mess that evokes all your worst fears that come when you imagine a haphazard blending of two uncomplimentary beers. 4/10.
Posted by Jay H. at 6:32 AM