THE LEGENDARY "TAKE IT!" FLEXI 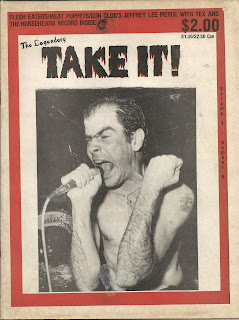 Just in the past few weeks I've received not one but two emails requesting that I re-post some songs I'd put up on my old blog Detailed Twang way back in 2007. Turns out that not everything's available with a click or two on the internet. Perhaps, with this post, everything now is. I'm talking of course of the legendary 1982 issue of TAKE IT! fanzine and the flexidisc that came with it - the one featuring here-only tracks by THE FLESH EATERS, THE MEAT PUPPETS and TEX & THE HORSEHEADS.

I'll go ahead and re-post what I wrote back then - tracks are available for download at the bottom. And I promise I will scan this entire magazine at some point and put it up on this blog

Other than my copies of FORCED EXPOSURE, the one 1980s fanzine I intend to take to the grave with me is the 1982 issue of TAKE IT! magazine, with CHRIS D. and the FLESH EATERS on the cover & nothing but quality on the inside. The magazine perfectly captured the rock n roll zeitgeist of the post-punk, mid-hardcore era, with heavy attention to outstanding bands like The Flesh Eaters, Half Japanese, The Fall etc. & great reviews & columns by the likes of Byron Coley and Don Howland, along with publisher Michael Koenig. It emanated from Florida (!), and this is the only copy I've ever seen or owned. 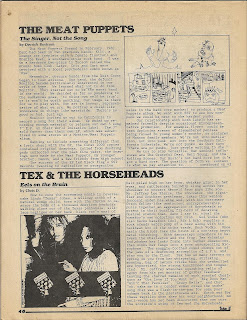 This is a magazine that on at least two occassions arrived with a "flexidisc" inside, as was fairly popular at the time. This particular flexi is a marvel. It features one of the most crazed tracks ever recorded by TEX & THE HORSEHEADS, with Jeffrey Lee Pierce on guitar. It contains an incredible MEAT PUPPETS track, "Teenager(s)", which features the greatest opening two seconds in the history of music, and which perfectly positions the band between their berzerk-core debut album and their country-fried masterpiece "Meat Puppets II". Finally, a live FLESH EATERS track from the height of their powers, apparently when they shared the stage with DIE KREUZEN on their quote-unquote "Toolin' for Beaver" tour. All copyright 1982. I've taken the Tex & the Flesh Eaters tracks directly from the flexi, but you get the Meat Puppets one from the CD reissue of "Meat Puppets II" (with loads of extra tracks), because - believe it or not - it sounds better. Enjoy!
Play Tex & The Horseheads, "Got Love If You Want It"
Download TEX & THE HORSEHEADS - "Got Love If You Want It"
Download MEAT PUPPETS - "Teenager(s)"
Download THE FLESH EATERS - "River of Fever (live 1982)"
Posted by Jay H. at 6:00 AM