THE BLACK JASPERS: DUMB AND DUMBER AND TOTALLY RULING 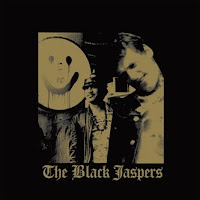 This crass and degenerate recent LP from THE BLACK JASPERS completely nails a certain sub-slice of the punk rock ecosystem, one that’s a little hard to define – but here goes. Picture a mop-haired greaseball with a leather jacket and a couple of missing teeth. He’s got a bullet belt and lots of acne. He might be what is commonly called a “guido”. When he writes a song, he likes to trot out well-worn rock and roll clichés like “in the city”, “c’mon baby” and rhyming just about everything with the word “brain”. Now add another guy like that, crank up the fuzz and static, foul up the language a bit, insert tongue deeply into cheek, and you’ve got THE BLACK JASPERS and one of my favorite records of the year.
Turns out it was actually recorded back in 2001, probably as the dumb-punk Killed By Death wave was cresting big time. The now-“legendary” KING KHAN of King Khan & BBQ, King Khan & The Shrines and multiple other bands formed this joke duo with another fella from a garage band called The Moorat Fingers, and then sat on the recordings til this year, when IN THE RED realized that a desperate public was in need for some palookaville punk rock. You can approach it on a couple of levels. If you just want to laugh, there’s plenty of mocking of greaser punk wankery to laugh at (they even use the word “wanker” a few times, like no North American I’ve ever met), though not a ton of out-and-out jokes. It’s an attitude that you’re either on board with or not (and oh how most people will hate this stuff). It’s also totally roaring musically. My favorite two-minute scorcher is one I’m going to post for you today – “Smart Car” – which dresses up overloaded socket-bursting guitar with a handclap-friendly singalong chorus right out of late 70s power pop. It has been compared to late 70s Chicago punk band THE MENTALLY ILL, and you’ve ever heard the masterpiece single that band put out, you’ll know why.
In short, this LP’s a total blast and a true contribution to the Guido Punk genre.
Play The Black Jaspers, “Smart Car”