BOW TO THE iPHONE, YOUR NEW MASTER 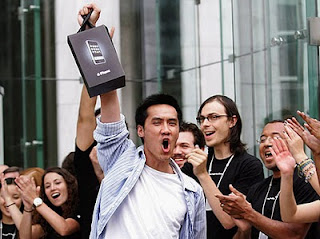 I have worked in the US wireless industry consistently since 1995, back when clunky cell phones like the Motorola StarTac or the Nokia “candy bar” phones were a big, big deal and no one had even heard of text messaging. Back then we would banter about something called “wireless data” – the ability to do something beyond phone calls – like it was a magical, far-off dream. For many years, it actually was. In 2001 I was in Ireland, and someone from a Japanese company played me and a bunch of others our first polyphonic ringtone – you know, a ringtone that was more than a bleeping, one-dimensional touch-tone sound – and people almost fell out of their chairs in amazement. Now those are considered anachronisms from another, less enlightened era, as are ringtones in general. I could go on and on with wow-isn’t-the-speed-of-technology-amazing stories, but that would be pretty boring.

No, I’m here today to marvel at a device that has sucked up more media air that just about anything ever created. Perhaps deservedly so – at least I think so. I’m not telling any iPhone user anything they don’t already know. It’s just that I’ve seen a hell of a lot of change, growth, triumphant companies, dying companies, dot-com bombs and whatnot firsthand over these past 15 years, yet I’ve never seen a single device nor “business vision” that’s so upended my industry as this one. This thing is so heads & shoulders above any other phone out there it’s not even close, and yeah, those Android devices are neat and all, and BlackBerries just keep getting better, but until Apple totally stumbles (and oh, they will, someday), the iPhone will become so ubiquitous and transformative that there’ll be those people who have the iPhone, and then those people who have everything else, looking longingly at the other group while they wait for their 2-year contracts to expire. It’s already that way, just not everyone knows it yet.

And I’m saying this not as Jay Hinman from MobiTV, by the way – the company I work for works happily and very closely with BlackBerry, Google, Samsung, HTC, all the wireless carriers and everyone else, in addition to Apple – I’m saying it as Jay Hinman, the consumer who sneeringly rejected the iPhone for two years (“I’ll never own a touchscreen device”) before getting one late last year, and who can’t believe how it has taken over dozens of things I used to do in other ways.

Here’s what this thing is to me:

1. My telephone. Duh. We don’t own a landline phone anymore, and since we also have Wi-Fi inside the house, it’s also my personal computer much of the time. But I’m getting ahead of myself.

2. My camera. As soon as the iPhone camera catches up to the other phone-based 5-8 megapixel cameras out there and adds a flashbulb, it’s game over. Then the final excuse for not getting one (outside of AT&T’s network) will have been vanquished.

3. My video camera. I wish it weren’t so, but this 3GS version is always with me and is “good enough”, so in the rare instances I want to film something – why would I carry a Flip Video or something more clunky?

4. My transistor radio. I can listen to pretty much anything I want, whenever I want, with a few app downloads. I listen to my San Francisco Giants games live on KNBR via the MLB At Bat app. I listen to WFMU shows live and via podcast. There’s Slacker, Pandora, Last.fm and a bazillion other radio apps, some of them actually good, and most of them free.

5. My stereo. There’s a ton of room for my music and podcasts – keep in mind, this is an “iPod” (remember those?) too.

6. My television. No, it’s not just MobiTV – though that’s pretty cool – but I can rent movies in iTunes for $1.99 or even buy whole episodes of shows for the same price, and sprawl out on the bed or watch these on an airplane. Some people even hook them up to full-screen TVs and have reported excellent picture quality if you use the right cables. Wow. The kids these days don’t care about screen size, they just want to watch when it’s convenient for them – something Apple presciently anticipated and/or helped to make so. Oh, and the YouTube app that comes included has just about everything you’d ever want to watch, even keyboard cat and old Nixon speeches.

7. My notebook. It’s actually pretty easy to peck reminders, beer reviews or whatever into this thing. I’ve found the keyboard much easier than I’d feared it would be, and now I can power through an email or a detailed beer review nearly as fast as I could on the old BlackBerry I had.

8. My means of male bonding with my son. I don’t like and have never really liked video games, but I have to admit that thanks to easy & fun 99-cent games like Doodle Jump and Fruit Ninja, we can kill even more time together, hangin’ out like dudes, than we did previously.

9. My reading device. Thanks to free or super-cheap apps from Mobile RSS, the NY Times, Facebook, Twitter, ESPN, The Atlantic and many others, I’ve turned into one of those cliché morons who whips out his iPhone and ignores everyone around him while something very interesting is going on deep, deep inside his phone. You know what? I’m almost definitely reading your blog or something fascinating that you tweeted about.

10. A bunch of other things. My bank (so easy to transfer $ or check balances with a couple clicks); my impulse-purchase storefront (eBay and Amazon apps are great for buying books and CDs); my mapping tool (who needs to print out MapQuest directions beforehand the way we did just a few years ago, when you can quickly get a driving or walking route on the phone that’s always with you?); my photo album; my pedometer (great app called RunKeeper for you runners out there); my restaurant or bar finder (even in real time - Yelp with “Monocle” is one of the coolest things I’ve ever seen); and a bunch of other things beyond those.

I didn’t set out to become a corporate cheerleader but I’ve watched even the hippest punk rock soldiers fall around me to sing the glories of the iPhone. Everyone seems to have this $200 super-machine in their pockets, and everyone else standing around them are just counting the days until their Verizon, Sprint or T-Mobile contracts expire.
Posted by Jay H. at 6:00 AM