“IT CAME FROM KUCHAR” 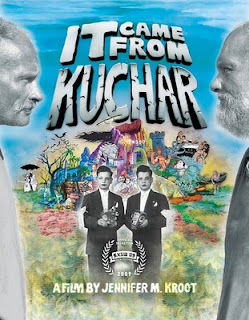 Any exposure I’ve had to the world of deep-underground filmmaking comes from my pal Danny Plotnick (the once “king of Super 8”, and the renaissance man behind the PLOTBOX blog) as well as from my brief 1990s subscription to FILM THREAT magazine. Plotnick cast me in a key role in his 1999 film “SWINGER’S SERENADE” which you can watch here in its entirety on YouTube, and he’s also the guy who showed me my first George Kuchar film, “Wild Night In El Reno”, at some 90s film event he was curating. Compared to the Warholian escapades and weird gross-out films I’d been reading about by George and Mike Kuchar for years, this wordless, “inclement weather” film was pretty tame – but cool. Yet compared to their professed “no-budget” masterpieces like “Sins of The Fleshapoids”, “The Devil’s Cleavage” and “Hold Me When I’m Naked” that they’d been making for decades – well, there’s a lot catching up I wanted to do. I figured one way to do so was to attend a screening of Jennifer M. Kroot’s recent documentary on the Bronx-born & formed twin brothers and their oeuvre called “IT CAME FROM KUCHAR” so I could get the proverbial cut of their jib.
I’ll admit that I walked out feeling like I knew just about as much as I needed to know about their films. In other words – I’m a busy, jaded, 42-year-old curmudgeon, and any precious time spent watching no-budget experimental film needs to be spent watching the very best of the best. I’m not convinced where the Kuchars’ stuff ranks, but I’ll willing to bet it’s arguably funny to watch when you’re 23 and very stoned – and even then for about fifteen minutes. The San Francisco Chronicle review by the oft-mocked Mick LaSalle that I read of this film the weekend before I saw it summed it up pretty well, “It's probably a safe bet - though it would take too many months of movie watching to prove it - that the best film the Kuchar brothers have ever been involved with is the documentary about them and their work by Bay Area filmmaker Jennifer M. Kroot”.
I actually enjoyed the film on a much different level – not the “filmmaker and his misunderstood lowbrow art” level, but as a portrait of two aging eccentrics and their commitment to staying dirt-poor to do it their way. In no way, shape nor form did George and Mike Kuchar ever sell out their singular vision, whatever that might be – and though even Kroot has a hard time putting her finger on it, she has no shortage of talking heads like John Waters, Buck Henry and others who give it a good try. I was strangely fascinated with the scenes filmed in George’s dirty, cramped San Francisco Mission District apartment with his cats competing for space, and at Mike’s complete lack of dental work – juxtaposed with clips from recent films that show aimless cavorting, horrible costuming, and bizarre sexual overtones. These two have been cranking out these films since the 1950s (!) and they’ve made it their life’s work - and good for them. You certainly have to applaud it on some level, and I’m all for a documentary film being made and distributed to give them a slice of their due. It’s a well-made connection to a piece of the film underground that virtually no one knows exists, and how a vision such as the Kuchars’ can carry and age through eras of rapid technological and cultural change.
Posted by Jay H. at 6:00 AM