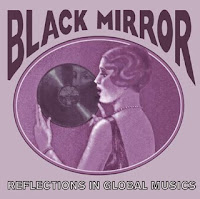 When one considers the sheer volume of recorded music from the last century, it’s hard to come to terms with how little we in the west know about world musics, particularly that which was laid down on 78rpm cylinders in the first half of the 20th century. A lot of that just stems from sheer unavailability. There have been some great archival digital digs of lost recordings from 1910-1950 or so, most notably the wild & weird SECRET MUSEUM OF MANKIND series curated by Pat Conte, which is really the first place I’d ever heard pre-WWII “world music” (an ethnocentric term if there ever was one – in my country it means “not created in the United States”). I’m just starting to wrap my head around the other 78rpm-era stuff that’s out there – and to be entirely clear and fair, I’m well aware that for most folks, myself included at times, listening to Laotian chanting or crackly Bulgarian folk dances from the 1920s is more of an academic exercise than it is a pure plunge into pleasure. Yet I think I’ve found the compilation that most successfully balances the continuum where a collection of far-reaching world music becomes less a thing of study than a thing of entertainment.

It’s a CD called “BLACK MIRROR – REFLECTIONS IN GLOBAL MUSICS”, and it came out in late 2007 on the groundbreaking archival label DUST TO DIGITAL. (Their name tells you all you need to know about their mission). I just got it a couple of weeks ago. For something that travels around the globe (all your major continents get some play) and through time (1918-1955) so radically, the collection hangs together incredibly well. When the songs hone to a more conventional understanding of rhythm and “song”, as they do in the excellent “Ngo Mebou Melani” from Cameroun’s Paul Pendja Ensemble, it’s strikingly easy to get one’s feet tapping. When they go to another, much more “foreign” place, like the jaw-dropping, scary Serbian nationalist warble by Peter Perunovic-Perun, it’s easy to just get lost in tonal layers of sound and feeling. “BLACK MIRROR” has a ton of songs like that.

The Asian stuff is the most jarring to me. There’s one track near the end of the CD from Laos that truly is just chanting of single syllables for minutes at a time. I played it for my six-year-old and he thought it was pretty much the funniest thing in the world. Yet after he left the car, I played it several more times for myself. People spill acres of hyperbole about being “transported to another world” when they review discs like this, but there’s really something to it. Close your eyes, picture your surroundings, and go there. Sometimes it even works if the music is transfixing enough, and more often than not, the stuff on here is. Then there are little anomalies like one of my favorites on here, a 1954 child-sung folk lullaby accompanied by zither (!) by Sweden’s Christer Falkenstrom. Young Falkenstrom is 10 years old, and yet he sounds like a precursor to indie folk goddesses Joanna Newsom and Josephine Foster on his one moment in the sun. Truly great stuff.

This collection is the work on one man, a collector and record store owner named Ian Nagoski. The organizing principle on the disc is “my favorite recordings” – that’s it. He picked them off of scrap heaps, from junk sales, and from dusty corners of record stores no one but people like him go to anymore. People like Nagoski are among my heroes in the world, and he’s given us a collection of strange masterpieces that I encourage anyone to dig into it, whether you’re doing so with an academic or a hedonistic ear.
Posted by Jay H. at 11:50 AM