COOL OFF WITH AN IPA, RUDIES 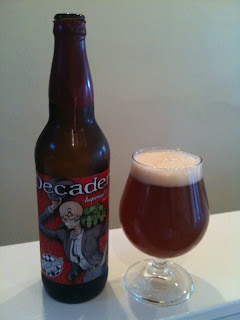 There's a much-touted brewer from Durango, Colorado called SKA BREWING. Yeah- like "ska ska ska, Jamaican ska". Definitely high on the list of "least likely to be worshipped by beer dorks" list just due to their name alone, but, well, here we are. I only bought this 22-ounce bottle of DECADENT during my recent trip to Overland Park, Kansas because I'd heard these guys are absoulte monster brewers, and I wanted to find out if they could transcend the porkpie hats and two-tone shoes and truly impress me.
DECADENT is truly an "imperial" IPA. A big 'un. It's even got a skeleton on the label. 10% in alcohol, it's way-malty and runs a little hot and boozy. It's still and silent and not one of those but fruity citrus IPAs we supposedly favor on the west coast. Tastes run closer to caramel and butterscotch, with a liberal dosing of bittering hops, of course. It's not bad, I'll give it that, but trying to choke down a pint of this is a little much, to say nothing of the big bottle I bravely consumed (for research purposes). If you encounter this on draft and they're friendly enough to pour you a half pint, that's about right for this rude boy. 6/10.
Posted by Jay H. at 9:27 AM