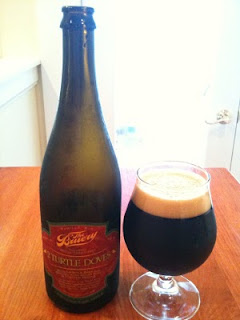 Almost more remarkable than my new favorite beermaker THE BRUERY being from Orange County, California (Placentia! Where??!?) is this cracked-up plan they’ve got to release a “12 Days of Christmas” beer every year, each based on a line from the verses of the song. So in 2008 there was the PARTRIDGE IN A PEAR TREE beer. Late last year came this rare and oft-praised TWO TURTLE DOVES. One can assume that a THREE FRENCH HENS ale should be hitting the shelves this winter. Something about this one, though – for a few weeks it seemed like you’d have to move heaven and earth to find a bottle, and I just assumed I’d never find it. Truthfully, with so many great beers from THE BRUERY around these days, it’s not like you can’t taste a sample of the magic if you’re so inclined. I just petulantly wanted this one. Thanks to my pals at San Francisco’s Healthy Spirits and their secret “back room”, I got one.

And here’s the part where I say: And Oh What A Beer It Is. Folks, I may be confused at time by weirdo curveball beers these guys serve up – I’m still scratching my head about “AUTUMN MAPLE” – but when they’ve got their game face on, it it just game over. THE BRUERY makes beers that justify the existence of a “beer sommelier”, not simply because of their fancy corked bottles, but because you NEED a professional to talk you through all the amazing and creative things going on in a Bruery beer. I’m not professional, but let me tell you about TWO TURTLE DOVES anyway. This dark and rich Belgian-style ale has a wonderful smooth mouthfeel that just makes you wanna cuddle up with a snifter of it against a fire or something, as it is meant to be savored and not glugged. It’s a fairly sweet beer, with the pecans advertised on the label actually coming through in the taste. One also gets deep malts and big touches of cocoa and candy. It may be fortified in a big way with booze (12%!!) but such is these folks’ mastery of the brewing art that you don’t taste it, nor do you really even smell it. It comes on slow and easy and douses the mouth with amazing flavors and balance. If you come across a bottle, make the investment, as you’ll never see it again, and don’t listen to that poppycock about aging this thing for a dozen years., Drink it with extreme prejudice right now. 8.5/10.
Posted by Jay H. at 3:56 PM