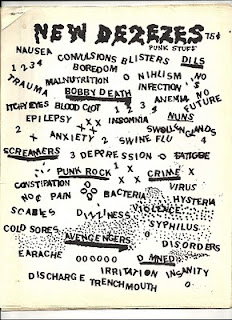 I finally figured it out – I now know how to scan fanzines (or whatever I want) from the privacy of my own home, and then assemble them into PDFs that you, the Hedonist Jive reader, may then read or print out. My dummy example that I have practiced these wack digital arts on is this 1978 San Francisco punk fanzine called NEW DEZEZES. I bought it for a quarter from a musty record store box at least two decades ago. It has “coverage”, if you want to call it that, of CRIME, THE SCREAMERS, THE NUNS and more. Based on the internal masthead, I’m thinking that the magazine was actually supposed to be called “New Dezeazes” – which would make a little more sense – but that someone totally farmed it when putting together the cover. The editors were Jean Caffeine, Claudia and Peter Urban, and the photos are from James Stark, who was the main SF punk photographer of the day. It may even be from 1977 – judging from the germinal punk records reviewed on the second-to-last page.
Rest assured that this is the first of many ‘zines I’ll post here at the ‘Jive. I’ll start posting the eight issues of my own 1990-1998 fanzine SUPERDOPE, which is pretty much the reason I took the time to figure this scan-and-assemble thing to begin with. In the meantime, just click right here to launch the PDF and start reading.
Posted by Jay H. at 5:26 PM