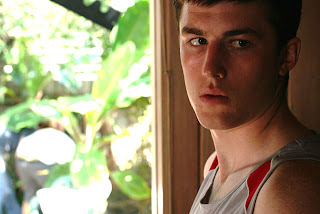 I was listening to these film critics on the Marc Maron podcast around Oscar time – “The Comedy Film Nerds”, I believe they were – and one of them expressed the opinion that the little-seen Australian crime drama “ANIMAL KINGDOM” was his very best film of the year. This was around the time that millions upon millions of Americans were scratching their heads over the “Best Supporting Actress” nomination of one Jackie Weaver from “Animal Kingdom”. Who the…? Now what the….? Hunh…? As a fan of the underdog, and as one who likes to look in the dark corners of filmdom whenever I can for raw, gritty ore, I made plans to see the film posthaste. Of course, it was long gone from theaters, and it took a Netflix rental and a free Monday night to finally sit down and ingest it. And lo, it was very good.

“ANIMAL KINGDOM” is a Grade-A crime family flick in the offbeat, independent mold. Tension abounds from the very first moments of the film, in which the 17-year-old protagonist (J, played by stupendous newcomer James Frecheville)’s mother lies dead of a heroin overdose on the couch next to him, as he blankly stares at a game show on TV. J, with nowhere to go, falls in with his grandmother (Weaver), whom he hasn’t seen for years, and her four bank-robbing, hideously criminal sons – his uncles. They are all at varying stages of psychopathy, with Ben Mendelsohn’s “Pope” being the most convincingly evil and liable to do something horrific at any point. No spoiler alert here, but – he does. They get into some big trouble early, and J is unwittingly at the center of it. The police strike at the family hard – the family’s been under watch for years, and finally they do something so awful that the full weight of the Melbourne police force falls upon them. The movie turns on J and where he’s going to slot into this mess – as an accomplice? As the one who rats them out? He’s just a kid, truly and in so many ways, and Frecheville is absolutely stunning in his ability to wordlessly bring out this guy’s confusion, utter desperation, and ultimate awakening.

Jackie Weaver, the mother hen of this ridiculous brood, is fantastic as advertised, as she orders murders and counsels her doomed boys in singsong voice and with crooked smiles. In fact, the three masterful performances in this one are the three actors I’ve mentioned – and Guy Pearce is in it too! (Always a soft spot for Mr. Pearce, star of “MEMENTO”, one of my all-time favorite films). I liken “Animal Kingdom” in spirit and tone to two other well-done 2010 films I watched recently, “THE FIGHTER” and “THE TOWN”, this time substituting Australian accents for Southie ones. I’ll definitely agree with those Comedy Film Nerd fellas and award this one a solid A.
Posted by Jay H. at 9:00 AM