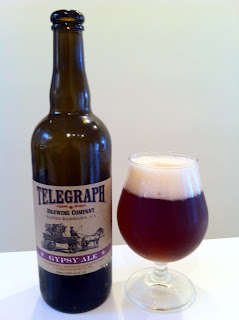 When I discovered the beers of Santa Barbara, CA's TELEGRAPH BREWING several years ago on a trip down South, lo, it was good. Real good. Real, real good. I gave them a good amount of hype on my olde Hedonist Beer Jive beer-centric blog, and made a point of going after pretty much anything of theirs that ever might have a chance to cross my lips. Then they nailed Northern California distribution in 2010, and wow - it was all here, available for the drinking. And yet, the new ones I tried just didn't quite measure up to those first few bottles of CALIFORNIA ALE and GOLDEN WHEAT. I did a little inventory of the Telegraph Beers I've had - which is most of 'em - and here are the scores I threw down at the time:
CALIFORNIA ALE - 9/10
GOLDEN WHEAT - 9/10
WHITE ALE - 7.5/10
WINTER ALE - 7.5/10
ROBUST ALE - 6/10
RESERVE WHEAT - Unrateable (because I flat-out can't stand the Berliner Weiss style)
Really, really solid - check that, beyond solid, with a couple of beers that rate in the near-stratosphere. Yet those were the very first two I'd had, and I was wondering what that one big trick was that they were holding up their proverbial sleeve. That trick, ladies and gentlemen, is called GYPSY ALE. Here's what they have to say about this magnificent creation:
Inspired by the exuberance of the Romani Gypsy culture, Telegraph Gypsy Ale celebrates the restless and adventurous spirit in all of us. We brew it with rye, unmalted wheat, and locally grown plums. Then we ferment it with Brettanomyces while listening to traditional Gypsy tunes. It's wild, it's unique, it's delicious. So go ahead, stray from that well-trodden ground you are following, grab a bottle, and dance along a crooked path. Opa!
Here's what I say - this is the beer of the year, 2011. Absolutely amazing in every way. It is a buttery, tangy, plum-dominated ale that may have Belgium written all over it, but also speaks to a Central Coast fermentation ethic that's totally and uniquely their area's own (Firestone Walker know what I'm talking about). This plum, it's understated, but it's there in every gulp. GYPSY ALE has this dry, tart but fruited-up deliciousness that's like nothing I've ever had before, not by a mile. They've outdone themselves, and created a beer to take up arms for. 10/10.
Posted by Jay H. at 8:41 PM