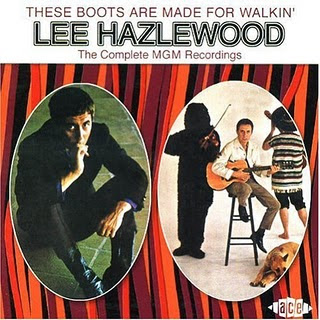 I’m in the midst of a big LEE HAZLEWOOD bender. I get this way with musicians I favor sometime; after a couple of years of ignoring them, I’ll play (or acquire) their entire catalog repeatedly over the course of week, before flaming out completely for another few years. Hazlewood’s like that right now. I have a good five or six CDs of his, and they all got some in-car or in-home airplay this past week, none more than “THESE BOOTS ARE MADE FOR WALKIN’ – THE COMPLETE MGM RECORDINGS”, a 2-disc set put out by UK label ACE a few years back that I’d really turned my back on since it came out. And I’m a huge Hazlewood fan, but he’s certainly a guy where you need to be open, waiting and very ready for his decidedly idiosyncratic take on pop music.
I love his stuff because, frankly, I’m a total sucker for soaring strings, brassy horns and ethereal backing vocals, and this guy was not only at the epicenter of the 1960s studio wizardry scene but was actively defining it. Obviously much 60s pop and country music featured these items as mere devices to draw out tears, help you crack a smile and whatnot. Hazlewood, he seems to want bring you in on some huge in-joke that’s totally cracking him up on at least 75% of his songs. He’s mirthfully entertaining himself, knowing that you’ll embrace it or flee, and he’ll never be something that everyone “gets”. I’ve never even bothered to try and convert others to the Hazlewood cause, outside of blog posts like this one. Many folks I know might love a weirdo who lived at the intersection of lounge music, cheeseball pop and country; had a voice like a weary, middle-aged lech (which he undoubtedly was); and wrote some of the more amazingly simple lyrical couplets of our time. But why take the chance that you’ll lose a friend forever if you’re wrong?

“THESE BOOTS ARE MADE FOR WALKIN’ – THE COMPLETE MGM RECORDINGS” covers the years 1966-1968, when Hazlewood was presumably the property of MGM and put out some 45s plus several albums for them like “The Very Special World of Lee Hazlewood”, “Lee Hazlewoodism – Its Cause & Cure” and “Something Special’. In fact, the latter takes up the majority of Disc 2 on this set, and had never been on CD before this reissue. Disc 1 is where most of the action is, though; classic slices of bent Hazlewoodism come at you repeatedly – songs like “Home (I’m Home)”, “Bugels in the Afternoon”, “I Move Around” and a series of collaborations with the Swedish Suzi Jane Hokom. Some of these can be found on other discs, but probably not this readily. In other words, this one’s in print, and some of the CDs I have where these repeat are pseudo-bootlegs. If you want a snapshot into this mad genius’ inner world, the 22 songs on Disc 1 are about as good as it gets.
“Something Special”, from 1968, is actually incredibly forgettable and not special in the least. Outside of the great opening track “Shades”, it’s a blues album of sorts. It features some of the most regrettable “scat” singing ever, thankfully not by Hazlewood – though that would have been great to hear – but a rough-edged backing vocalist who barges in on instrumental breaks and ruins what were mediocre numbers to begin with. Certainly can see why this stayed out of print and unavailable for a while, but hey, I’m a completist. I even just ordered one I missed, the 55-track “Rhino Handmade” double disc “Strung Out On Something New”, just this week. We’ll get back to you on that one; meanwhile, this MGM stuff is certainly worth some exploration if you’re so inclined.
Posted by Jay H. at 6:00 AM