THE MOTHER OF ALL BEER REVIEW POSTS 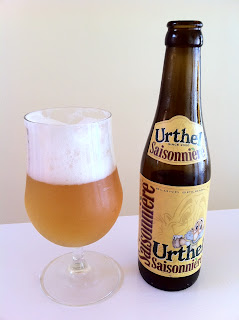 This is what happens when I continue to enjoy (and rate) beer, but fall way behind on reviewing it here. I have to make you suffer through short, stuttered, pounded-out reviews that barely give you the context nor the subtleties of all the wonderful and not-so-wonderful ales I’ve tried the past few months. Well, skim them if you can, try to pick out some super-descriptive keywords to help your shopping list, words like “hoppy” or “delicious”, and hopefully you’ll give some thought to a few new beers you hadn’t previously considered. And please enjoy the savaging of some of the lamer beers I’ve recently had toward the bottom. Here we go!

URTHEL – “SAISONNIERE” – Remember when Belgium’s URTHEL (De Leyerth Browerijen) shocked the world with the first “Belgian IPA” several years back, the excellent HOP-IT? Whoda thunk that they’d come up with something even better, and it would be in the form of the pedestrian farmhouse/saison ale? This is a true worldbeater. Yeasty like you wouldn’t believe. Crisp, light and fruity with slight bitterness and barnyard. Unflitered, bottle-conditioned mastery of the art of beer making, kids. 10/10.

EMILISSE – “DUBBEL” – One of the very best of its ilk. Absolutely delicious toasty dubbel, with smooth body, medium carbonation and the taste of chestnuts and sugars. Easy to drink and a little sweeter than most dubbels, and something that needs to get on your want list by the time you finish this post. 9.5/10.

THREE FLOYDS – “ALPHA KING” – Had my third pint of this ever on draft in Chicago last month. I’d drink it at least once a month if I could. The pale ale winner and still near-champion; only putative “pale ale” that I think beats it is the whopping “Bitter End” from their neighbors at Two Brothers Brewing. 9/10.

GREEN FLASH BREWING – “SUMMER SAISON” – Could this be the legendary saison I had on draft three years ago and also rated 9/10? Well, assuming that it’s so, they’ve now got it in bottles and it’s fantastic. Beautiful earthy smell and taste, just a near spot-on saison that’s winning in summer, spring or whenever. 9/10. 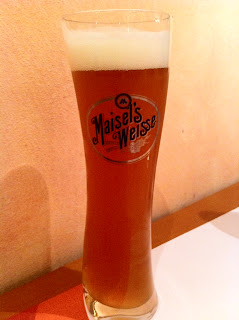 BEAR REPUBLIC – “MONKEY HIGH FIVE” – Oh yes. This is a smoky, hoppy, toasty beer that reminds me of nothing so much as what an “oatmeal IPA” might taste like. Leave it to these Healdsburg heroes to come up with something this great, albeit on draft only. 8.5/10.

DRAKE’S BREWING – “NYACK” – Took awful notes on this barleywine that I enjoyed at Beer Revolution in Oakland, CA, but figured you should know I scored it an 8.5/10.

RUSSIAN RIVER – “SALVATION” – An old “strong dark ale” friend has returned to the shelves, this time in smaller bottles. Hello yeah, it’s been a while. Chocolate and licorice, thick foam, high high carbonation. A degree of quality control and taste that you always expect and get from Russian River. 8/10.

DRAKE’S BREWING – “DENOGGINIZER” – First time having this old favorite in a bottle for me, and yes, it’s a guns-blazing “hop assault” but not in the manner of some other tongue-destroyers from this brewer like the legendary “Hop Salad”. They do a great job balancing them with malts and a general creamy, warm mouthfeel. Glad to have this one on the shelves for the first time. 8/10.

BALLAST POINT- “TONGUE BUCKLER” – Been wanting to try this forever – a ridiculously hopped-up red ale with all the bittering and malty sensations that conjures. 10% alcohol too. Not for the frail, nor those given to fainting easily. Like it a lot, but maybe once every six months or so. 7.5/10.

THREE FLOYDS – “ARCTIC PANZER WOLF” – Say what? A very strong, 9% ABV imperial ipa, tipping the scales at 100IBU. Not truly "balanced" at the end of the day. Strong hop attack, and very bitter with pine and grapefruit bitterness. For super, super, super hopheads.. 7.5/10.

BRAUEREI GEBRUDER MAISEL – “MAISEL’S WEISS” – What a delicious hefeweizen, pictured here in the glass from which I drank it. A fetching combination of banana bread and nutmeg – totally buttery and clean. 7.5/10.

NEW BELGIUM/ALLAGASH – “VRIENDEN” – A collaborative bottled beer made from hibiscus and endive (for real!). Sweet and flowery, with Belgian bacteria overtones. Really tangy combo of Belgian Brett and fruity hibiscus. Thick mouthfeel that lingers on tongue. 7.5/10.

BROOKLYN BREWING – “MAIN ENGINE START” – Had this on tap in NYC, which is the only place one can find it. It’s an abbey “singel” ale like Rochefort 6. Tasty, with some frothy zest and light sugars. Truly a “lite” Belgian ale as a “singel” might imply. 7/10.

CLOWN SHOES – “EAGLE CLAW FIST” – A dry hoppy amber ale with the fruit way, way in the back. Murky and deep and dark. Very enjoyable and even a little boozy at 8%. 7/10.

GOOSE ISLAND BREWING – “PEPE NERO” – A new dark farmhouse ale with 4 malts and 2 hops. Fairly nondescript but in the best sense of the word – smooth and simple and good. I can see how farmers could have glugged this by the bucketful after slopping the hogs all day – and perhaps still do, in the Chicago stockyards. 7/10.

MIKKELLER/BREWDOG – “I HARDCORE YOU” – Check it, this is an exceptionally malty imperial IPA from two showboating overseas brewers. Creamy! Easy to drink fast when thirsty. Whoa there homey – this is a 9.5% alcohol by volume ale. Less strange than I expected, perhaps less outstanding too, but such a cool curveball I have to award it a 7/10.

MARITIME PACIFIC BREWING – “NIGHTWATCH” – A very solid dark amber ale that I enjoyed with dinner one eve. Light-bodied and a great food compliment. Not much one can say about non-imperial reds; they just are, and this one definitely is. 7/10.

TWO BEERS – “EVOLUTION IPA” – Another one from the Northwest, enjoyed at Collins Pub, that defies much description. That’s right – the hoppy IPA. “Bitter”. “Hoppy”. “Not malty”. “Very Good”. 7/10. 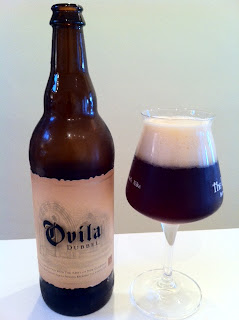 SIERRA NEVADA - “OVILA DUBBEL” – I drank this the night after my dubbel post, totally excited and ready to roar…..and then, hmm. A sweet, low-carbonated brown ale; sugars, malts and a little far-out spice. Not classically Belgian, if that’s what you’re asking. At least that’s what The Jive says. 6.5/10.

BROUWERIJ GAVERHOPKE – “KOERSEKLAKSE” – Spicy, hoppy, zesty unfiltered Belgian blonde with some strong saison action going on. But truly middle of the road. Look up the list for better examples. 6.5/10.

CLOWN SHOES – “BROWN ANGEL” – The English might blanche at this “double brown ale”. 7% alcohol. Super frothy head that formed foam sculptures in my glass. Malty all the way. Not an insignificant hop bite; yes, a middling hoppy brown beer. OK then. 6.5/10.
MIKKELLER “EAST KENT GOLDINGS IPA” – An English single-hop IPA, part of their series of the same. Hops are strong. Piney, no citrus. Foamy, with high carbonation. Serviceable. 6.5/10.
UNCOMMON BREWERS – “BALTIC PORTER” – Enough. My third beer from this off-kilter Santa Cruz brewer, and while they promise wild experimental brewing & exotic tastes, the truth is, they’re all fairly middling to my palate. Star anise and licorice – and yes, I taste them in this hearty and strong imperial porter. But I don’t taste anything that’s going to make me want to grab this again. 6/10.
STONE/GREEN FLASH/PIZZA PORT CARLSBAD - “HIGHWAY 78 SCOTCH ALE” – Collaboration beer, nothing too exciting, and surprisingly even a notch below many of the better malty scotch ales on the market. Syrupy but strong at 8.8% alcohol. We call it a 6/10.
MIKKELLER – “IT’S ALIVE” – Stand back everyone, it’s a “wild ale”!!! And not a very good one at that. I’d call it a sugary fruit beer rather than anything wild per se, and I love Mikkeller as you know. This one actively annoyed me. 5.5/10.
PRETTY THINGS BEER & ALE PROJECT – “OUR FINEST REGARDS” – A barleywine-style ale that I found entirely unremarkable. Strong, with deep caramel taste – but so what? I rarely drink something so middling that I’ve forgotten it completely even before I’m finished. (And I love Pretty Things, but everyone gets a mulligan). 5.5/10.

NEW BELGIUM - “RANGER IPA” – Aggressively average IPA, light and piddling in terms of hops vs. most big boy IPAs. An easy drinker for times when you’re not really thinking about beer nuances all that much. 5/10.

BIFFICIO GRADO PLATO – “STRADA S FELICE” – Hope I got that name right – this is an Italian brewer who’ve experimented with an amber ale brewed with chestnuts. Deep brown ale with weirdo aftertaste. Completely still, with zero head at all. Thick and chewy, tastes of walnuts, chestnuts and nuts of all kinds. Didn’t like it. Totally bizarre. 5/10.

CHERRY VOODOO BREWING – “TRIPEL” – This new San Francisco brewer tried to make a desperate splash at SF Beer Week by shuttling around some tarty pseudo-models in short skirts as “The Cherry Voodoo girls”. If you’re going to be that obnoxiously retro, you’d better have the beer to back it up. They don’t. A chalky, fruity, yeast-deficient tripel that tastes as if it wasn’t done fermenting yet, and was rushed to market because the Cherry Voodoo girls’ legs were getting cold. 4.5/10.

CHERRY VOODOO BREWING – “FILTH PIG IPA” – Oh but it gets worse. This imperial IPA was completely still with no head, tasted medicinal and was just an abomination. 2.5/10.

FULL CIRCLE BREWING – “BARLEYWINE” – Simply awful. Tastes like varnish that could peel the lacquer off your hardwood floors. Barely drinkable. 2/10.