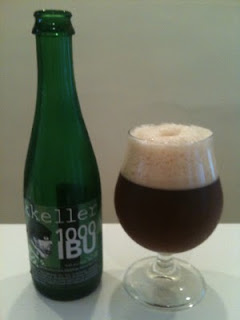 In case you haven’t heard, the amount of bittering hops in a beer can actually be measured in a metric called “International Bittering Units” (IBU). Let me give you an example of how this works. A light, boring American macro-lager like oh I don’t know – Budweiser – checks in at about 10-15 IBU. A tame India Pale Ale like the LAGUNITAS IPA raises the dose to about 45 IBU’s – and that’s already a bridge too far for people who don’t like hops, which fortunately includes very few of us (right?). Conversely, a big, hardcore IPA like the MOYLAN’S HOPSICKLE – one of my all-time favorites – hits the triple digits at over 100 IBU’s. And yes, you definitely taste it.

This whole IBU hoo-ha has set off something akin to an arms race to ensure that a brewer’s extreme, hoppy beers crack the triple digits – hence the immense popularity of the “Double IPA” and sometimes “Triple IPA” over the past five years or so. American brewers have gone all out to ensure that customers are promised a miserable, tongue-scorching experience with beers called “Hop Wallop”, “Tongue Buckler” and the like – except that for some of us, the experience is anything but miserable. Nay, the palate-scraping, tongue-tingling hop “bite” is among the finest sensory pleasures on god’s green earth, when rendered by the small handful of brewing masters. The best brewers are able to retain the juicy, citrus characteristics of the hop batch, while still stinging the skin of the mouth with an overload of IBUs. Which brings us to MIKKELLER 1000 IBU, which I braved the other evening. If 100 IBUs is intensely flavorific when crafted with the right set of hands, what will those wacky itinerant brewers from Denmark cook up in pursuit of quadruple-digit IBUs? Let’s find out.

First off, I’m not even sold on the whole concept of measurable IBUs, but I'm still a sucker like the rest of all y'all. Now that that’s out of the way, can we truly enjoy a beer that supposedly has 1,000 units of international bittering? Why yes, yes we can. MIKKELLER 1000 IBU is Insanely hoppy but remains drinkable. It certainly qualifies as an, ahem, “hop monster”. It pours a dark orange/brown with loads of foam. Some luscious caramel malts are indeed discernable deep within the scorch. There’s really no citrus action at all – it’s all about the pucker and the glory of the pine resin. It’s as intense experience as HOPSICKLE, and yet no, it’s not ten times as intense. I’m glad I buckled in for this wild ride, and even paid $13 for the pleasure of doing so. If I were to rate it on my previous blog’s ten point-scale, I’d settle in on a better-than-respectable 7.5/10.
Posted by Jay H. at 6:30 AM