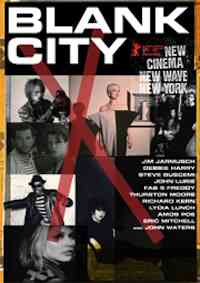 The alternative culture that I was fake-soaking in for much of my teenage and young adult life continues to make its way to the documentary screen as its participants begin the "genuflection" stage of their lives. This excellent film focuses on the weird Kuchar-level outsider film scene that grew up around punk rock in New York’s East Village from about 1976-1985, and as such, predates any active involvement I myself might have had in consuming it. I was seeing provocatively ugly & humorous R. Kern and Nick Zedd 1980s short films like “You Killed Me First”, “They Eat Scum” and “Right Side of My Brain” on friends’ couches in college right after the time period covered by this movie; the more remarkable story are the seventies filmmakers who worked in the punk and no-wave era, and even took part in the bands themselves amidst a bankrupt New York of legendary squalor and lawlessness.
1970s New York is always an endless source of fascination for me, whether it’s an ESPN documentary on the 1977 Yankees, Patti Smith’s recent memoir, a Lindsay/Koch/Dinkins/Giuliani book or Amos Poe’s CBGB documentary “Blank Generation”. It’s truly phenomenal to look at the broken-down, trash-strewn Greenwich Village of only thirty or so years ago, to say nothing of “53rd and 3rd” (now home of the beautiful Time Warner building, and down the street from Bloomberg), and compare it to the NYC of today. Only people who weren’t living in both epochs in Manhattan, or the deliberately delusional, can truly bemoan the loss of “old 70s New York”. Poe himself was at the screening I attended, and the inevitable question came from the audience after the film about how he feels about New York today, with the subtext being a great big snarky opening the questioner left for Poe to rail about yuppies, money and safety. He reminded the audience of how much he prefers the safety and sanity of modern NYC, even if the most dangerous thing that can happen now is “getting your foot run over by a stroller”. I was happy for his candor and willingness to stay away from cheap point-scoring, though I’m sure it disappointed the questioner.

“BLANK CITY” is a beautifully-edited film, with thousands upon thousands of snippets from the deeply underground punk films of the era. Thankfully, many of the era’s participants are still very much alive – perhaps more than I’d imagined – so there’s great commentary throughout from Ann Magnuson, Nick Zedd, Lizzie Borden, Jim Jarmusch, Lydia Lunch, John Lurie, Beth B and Scott B, Lung Leg, Richard Kern, Charlie Ahern and even Fab 5 Freddy and Debbie Harry. The picture given is a film scene born of complete poverty and artistic vitality, along with much intermingling between musicians, directors and “actors”. Quote marks are used here because one of the main tenants of this scene was the use of non-actors, along with a dedication to debauchery, excess and an uber-aggressive assault on the mores of the time.


At first, the films were made with borrowed cameras, shot in a day and distributed amongst friends. It remained that way for some time, and many of these trash-works were only discovered several years down the line as the participants found greater infamy as “real” actors (Steve Buscemi, Vincent Gallo, John Lurie) or as musicians (Lydia Lunch, who was omnipresent in just about every area of Lower East Side subculture). Eventually a movie house called NEW CINEMA opened up in NYC that catered to these films, and the home video revolution a few years later allowed some of them – most notably the shocking Zedd and Kern films – to make their way to college couches across the USA.
I would be remiss if I didn’t weigh in a little on the actual content of the celebrated films featured in “BLANK CITY”. Having made a similar point in my piece about the Kuchar Brothers and their documentary, I think it’s important to note that broke twentysomethings with handheld cameras and transgressive notions about what constitutes cinematic art does not in itself constitute a watchable canon of films. On the contrary, most of these Super-8 snippets are abstract or drugged-out beyond absurdity, and feature clipped performances, sound abominations and a parade of wretched imagery expected from nihilistic artistes. You couldn’t pay me to sit through a day of these films, with the obvious exception of latter-day works like DOWNTOWN 81 and WILD STYLE, both of which I am chiding myself for never having seen. Watch “BLANK CITY”’s clips from loopy John Waters-knockoff films like “Rome 80” and tell me that you could stomach it better than I could. That’s one strong stomach you have there.
“BLANK CITY” has the power to truly allow you to overlook the actual content of the films and instead lets you revel in the decadence and artistic drive that got them made. It’s backed by a pulsating soundtrack of no-wave, early rap and CBGB punk from Mars, Theoretical Girls, Grandmaster Flash, Television and too many others to count. It’s a barrage of imagery for nearly two hours, and I left with a huge appreciation for the time period and the city, and for a scene that seems like it took place on another planet. It leads one to wonder where and how the next groundswell of creative energy will erupt, and whether it can truly meld art, music and film together the way these sub-Godard, sub-Waters scenemakers attempted to do. Big thumbs up if this comes to your town.
Posted by Jay H. at 12:24 PM