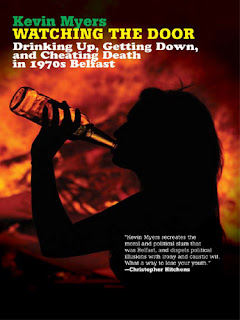 Violent sectarian war between Protestants and Catholics in Ireland was totally baffling to me as a kid. I grew up as IRA and UDA partisans were blowing each other and everyone around them to bits in Northern Ireland, and, not knowing the ancient and impenetrable hatreds that self-perpetuated and multiplied over the centuries, it struck this American as colossally stupid. Two sets of Jesus-lovers killing each other ad nauseum and to no real end! Turns out that having these hatreds play themselves out in violent fashion right before your very eyes is no more illuminating, as journalist KEVIN MYERS' outstanding memoir from these times, "Watching The Door - Drinking Up, Getting Down and Cheating Death in 1970s Belfast", makes abundantly clear.
Sure, the Catholics of the time would tell you they had proximate cause - the presence of British troops in Northern Ireland - as would the Protestant defenders of the status quo, especially once the bombs really started exploding in the early 1970s. Myers, an Irishman brought up in England, came "back" to Belfast in 1971 as an exceptionally low-paid newspaper and magazine writer to document what he and just about everyone else thought would be a short set of over-and-done skirmishes. Yet Myers ended up becoming such a part of The Troubles themselves that he met everyone, drank with everyone, was threatened with death by just about everyone, and was one man among few who got this close and actually escaped with his life. His memoir is absolutely riveting. Myers lived a reckless existence, the sort of hard living that war correspondents through the years have worn on their sleeves with pride. He was an early 20s young male interested primarily in women and drink, and secondly and I think halfheartedly, in the vogue Leftist politics that at that time very much identified themselves with the IRA cause. But mostly women, drink and excitement of all stripes.
Myers' abundant self-effacing humor and sense of pacing really make this book. Quickly, after some harrowing and up-close views of death, including a British solider shot and killed in front of him, he has the pulse-quickening realization that he actually likes this line of work, and he retroactively documents the follies and heedlessness of his youth - untold amounts of drink, nameless sex with nameless girls, and a sickening amount of death, all rolled up into one big imperial pint glass of recklessness. Myers was barely even working, truth be told, and could have easily left Belfast at any time. Yet he bought a house, albeit one that lost half of its value very quickly after it became identified as being in a bomb- and killing-ridden section of town.
That was the thing that I learned from this book - just how hideously bad this war was. I knew there were senseless IRA incidents, but I didn't know just how many people were murdered in places like Belfast and Londonderry and Armaugh during the 1970s, and just how often they were murdered simply for walking down the street or for purportedly talking to the wrong person. Myers gives them all their names, names that otherwise would be forgotten to most historians, and does his best at each turn to humanize the needlessly dead and the impact of their deaths upon their families. At least he does this with the innocents; he also eviscerates the guilty and their stupidities with much wit and mocking, and in retrospects suffers absolutely none of the many appalling fools he comes across. My favorite part was when he described the Irish dockworkers who were upset that a Japanese company had bought a port from an Irish company, particularly one who dismissed the entire transaction with, "Fuck the Japanese. Them's all Chinamen anyway".
Yes, in many ways it's a growing-up story. We all have youths typically more colorful than our truly adult years, some of us more than others. Certainly Myers "grew up" fairly dramatically, formed by the searing traumas of his 20s. I was in Rome last month on vacation, where I read this book, and ran into some late-fifties Irish women in the Catacombs on a tour & asked one where she was from. "Belfast", she told me, less than 24 hours after I'd finished this book, which chronicled what was no doubt the horrific backdrop of her youth as well. Naturally I had to burble and sputter about this great book I'd read, and she proceeded to lay out the miseries that she, and what turned out to be her accompanying sister and cousin, had witnessed. A husband blown up here, a cousin shot there; a house firebombed next door here, a killing in front of their house there.

Then I told her that the writer's name was Kevin Myers. "Aye, Kevin Myers, oh boy, that's too bad, he's a right-wing nutter, he is". I learned that evening with some internet research that Myers, now a regular columnist for the Irish Independent, is indeed a bit more conservative than he was in his youth. Aren't we all, right? I read some of his columns, and they have all of the opinionated, humorous and learned bluster of this book - and then I liked him even more. Put it this way - if you appreciate Christopher Hitchens, who is the man who steered me to this book via a shout-out in his "HITCH-22", you'll love this similar Left-to-Right conversion story, which takes place in a backdrop considerably more dangerous & maddening than anything even the well-traveled Hitchens experienced in his own memoir.
Posted by Jay H. at 9:35 PM