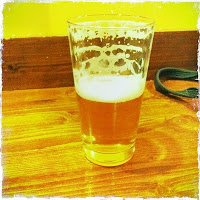 Yeah, so I announced a few weeks ago that me & the family went to Rome, Italy for 10 days, but I never really followed up on the pronouncement. No travel photos, nothing. Instead, I figured, since you're probably somewhat interested in beer & all, that you'd want to know what sort of imbibing goes on in Rome, much heralded of late as a craft beer mini-mecca. I'm here to report that yes, if you want to drink outstanding beer in Rome, you can. You need to look around a little more than you might in, say, New York or Portland, but if you do your homework in advance, you can get yourself to bars that serve oceans of Italian craft beer suds.
I found myself at the conveniently-named BIR & FUD, one of two raucous microbeer bars located right across the street from each other in Rome's cobblestoned Trastavere neighborhood. I wanted to try both, but instead parked my kiester on a stool at Bir & Fud for an evening and proceeded to wildly choose Italian beers I'd never heard of, or certainly ones I could never get back home. Did they hit "Belgian" or even "San Franciscan" quality levels? Let's break them down one by one:


BIRRA DEL BORGO ENKIR - A 6% abv saison from the superheroes who make the excellent EXTRA RE'ALE, which you may recall I reviewed here. Alas, this may have a strong taste and loads of delicious foam to blow off onto a scowling, American-hating Italian's shoulder, but it's missing the farmhouse funky fresh feel of a great saison. Too sweet for my britches. Or something. 5.5/10.
BIFFIFICIO RURALE SETA - Well what about this one then? Yeah, this hits the spot. A blonde ale that clocks in at a mere 4.9% alcohol. Carbonated pretty heavily, really fresh and something that probably would wash down a plate of cacio e pepe most fantastically. I was going gang busters on it before remembered to snap the photo you see above. 7/10.

LOVERBEER MADAMIN - I had to stop after this one (what, you think I'm a drunkard or something?), and unfortunately, this one night was my only foray into the dark heart of Italian beer. So why not make the last one a "Loverbeer", right? This is a Flanders red ale, sour and foamy and (again) really fresh-tasting - and yet a far cry from Belgium. It's like - the Italians just arrived at good beer after decades of producing swill. Rather than build slowly, they leapt right into the tough stuff - Flanders red ales, highly-hopped American IPAs, dubbels and whatnot. So comparing their wares to those of the Masters, with their hundreds-of-years head start, is certainly not "fair". At the end of the day, you've still got to assign a score - and with an extra .5 thrown in for gumption, I give this a 6.5/10.

Would be very interested if anyone in the reading audience has any Italian ales they'd like to give a shout-out to. I'm new at this game, the Italian good beer game - just like they are.
Posted by Jay H. at 2:16 PM