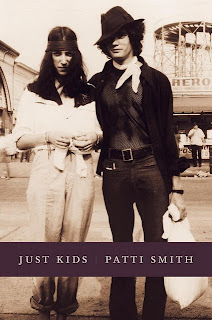 Patti Smith’s excellent bestseller about her young adulthood & deep relationship with the artist Robert Mapplethorpe shows just how far she’s evolved over the decades both in perspective and in her ability to write true prose. I’ll admit that when the book came out I passed it by simply due to the fear that she was still overwriting in that beat-generation bohemian stream of consciousness style, as she did in the mid-70s. Then my wife started reading it and initially confirmed some of my worst fears by reading egregious passages aloud (“His name was Cherokee, and he had one foot on the ground and another in the Milky Way”). Fear not. “JUST KIDS” is truly one of the most moving, revealing and even inspirational books I’ve read in some time. Far from wallowing in ego, Smith, with the perspective of nearly 45 years from the book’s autobiographical starting point, shows the fragility and intense artistic drive of her and Mapplethorpe’s youth, and how the two of them sustained each other as lovers, muses and artists despite some pretty significant obstacles – Mapplethorpe’s drug use and homosexuality among them.
It’s hard not to be moved by the story. By the end, which culminates in Mapplethorpe’s death from AIDS and Smith’s promise at his deathbed urging to “tell their story”, as she has in this book, I’ll admit to some serious welling up. Mostly I was taken with their growing-up tale, and the way Smith uses short, compact, clipped sentences to tell it. These are two kids, each barely 20 years old, who found each other by happenstance when they each arrived in New York City in 1969, completely broke and in Smith's case, so bereft of connections or money that she was sleeping in public parks in the middle of Manhattan. Both recognized early on that, in this most countercultural of times, all they wanted to do was create art - abstract, ornamental and often sacriligious art for at least their first two years, before they found their individual distinct paths as poet and photographer respectively.
Mapplethorpe and Smith were more or less instant lovers who lived together, and essentially spent every hour not spent working on non-art jobs together. I was sucked in at the recounting of each individual's search for their essential selves in both art and in life. Smith, who didn't drink nor do drugs and who worked a normal 9-5 job in a bookstore to support the couple, was able to unhinder her artistic energies as a result, though it's pretty clear that Mapplethorpe developed faster as a true "artist" despite his depression, lack of focus and often destructive behavior. By the time she'd found herself as the quote-unquote punk poet we know her to be from her 1975-79 albums, Mapplethorpe had already developed a pretty significant body of photographic work - such that it is. He only truly gained artistic fame for his S&M photography and dark, transgressive imagery at the end of his life and after his death. The story of the non-stereotypically "gay" Mapplethorpe trying to tell Smith that he needed to go to San Francisco's Castro district in the early 70s to "figure things out", and her complete inability to understand what he was talking about, is pretty telling at the bond that these two shared. She could not even imagine it could be severed - and the book makes it clear that it really never was.
"JUST KIDS" paints these two as the ultimate risk-taking bohemians, and what sleazy New York City life was like in the pre-punk rock intersections of art and music, even when dirt-poor. Wildly fun if you were in the right places - like living in the Chelsea Hotel down the hall from eccentric oddball music curator Harry Smith, as these two were. I admire Patti Smith's modesty about herself and her development - she truly comes across as a wonderful person who has probably meant a great deal to the people in her life. I quibble a bit with some of the namedropping of famous acquaintances like William S. Burroughs and Janis Joplin, which seem a little perfunctory, but granted, meeting your heroes must've been a pretty big thrill - I just wish she'd balanced the book a little with more true tales of non-famous friends and acquiantances. In the next book, perhaps. I hope she has a few more in her - she's lived quite a life.
Posted by Jay H. at 8:36 PM