NOTES FROM A MIDLIFE CRISIS RUNNER 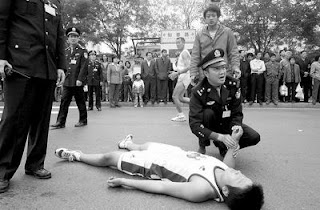 It could have been a car, a mistress or I could have started a band. Instead, four years ago I immersed myself in the most intense bout of athletic activity I'd ever mustered in my then-39 years of life, and somehow, it's only grown in intensity since then. Sure, I played some Little League and some soccer as a young lad, and have been an outstanding armchair student of professional sports my whole life. I've even had waxing and waning gym memberships over the years, and some years I even got my money's worth. Yet running - throw-the-shoes-on and go-out-style running - has been a true midlife salvation, particularly as it counteracts what my severely declining metabolism, moderate-to-heavy craft beer intake and morning bagel obsession would otherwise have wrought.
If it's truly a midlife crisis, then I have to admit it's one I'm pretty happy about. I'm running 20+ miles a week and "competing" (well, against myself) in sanctioned races at least once every two months. I ran my first Half-Marathon in November, and survived. A marathon, once totally unthinkable, is actually starting to appear thinkable. For a skinny yet at-times doughy, uncoordinated non-athlete who shunned jockitude for much of his life, this running thing's been pretty revelatory and one of my favorite things to do every week, painful as it often is. I mean, it took a while, but I'm actually kinda good at it now. All things being relative of course. The other day I ran a sanctioned 10K along San Francisco's Embarcadero, and despite finishing right behind a shirtless, hairy-backed, sixtysomething little wisp of an old man, I pulled down a time of 49:53, which effectively had me at just over 8 minutes a mile. Of course I was gunning it, and my heart was about to leap out of my chest at the end, but it was intensely gratifying on a personal level when I clocked in below the psychological fifty-minute barrier, and at 43 years of age no less. Of course it meant nothing - simply that the hours I'm putting in every week are their own reward. I guess.

Now that I've been thoroughly exposed to the subculture of runners, there are many things that have me bemused. For instance, some of the pseudoscience and old wives' tales that seem to surround the sport, and how seriously people seem to take them. After my first race in 2008, a 10K (6.2 mile) race from AT&T Park in San Francisco to Candlestick Park, I remember seeing runners who'd just finished the race at 10am streaming to the post-race pasta table, loading up their plates to the sky with piles of "carbs" and wolfling them down with gusto. This after a mere 6-mile race that took all of 50 minutes to finish. Wow, you well-conditioned athletes must be really depleted! Then there's the people running down the street who bounce in place and jump to the heavens while at stoplights, lest they mar any momentum they had toward whatever it was they were chasing. Seriously, if anyone ever sees me do that in public, you have permission to flog me at will. I find it embarassing enough to stretch my pasty-white legs before an audience, let alone bob around like I'm fit as a fiddle. Oh, there's also the constant "wooooooooo" you hear at a race from the sidelines and even from other runners by your sides, with people clanging cowbells and screaming at you to "come on, you can dooooooo it!!". Is it possible to love and loath something at the same time? I believe it is.
Another reason I took up running is easily proven by my previous two posts. My love for good beer didn't precisely coincide with my desire to "run for health", but the two are intricately linked. If I weren't drinking, I might not be running. If I weren't running, I can almost certainly say I wouldn't be drinking. If given the choice between one or the other - and this is a tough one - I'd forgo drinking entirely. I'm serious. It's either that or the fat farm for me, because I'm just not going to "diet" the way some people seem to be able to. I'm fortunate enough to keep my weekly beers in the 2-5 range, and my enthusiasm for drinking for drinking's sake has almost completely disappeared. I admit that replacing such a passion, to say nothing of my lifelong music obsession that's truly fallen by the wayside, with sneakers and distance running strikes me as exceptionally uncool as well. But it is what it is.
Running is definitely a "know thyself" kind of sport. I've now figured out how to prevent the two injuries I've had, the foot pain known as plantar faciitis and a knee-area injury known as IT band inflammation. Both were painful and nearly had me give up the whole activity - yeah, there are always tempting reasons - but now I'm pretty sure I know how to avoid them in the future, or fix them quickly if they reappear. I've also figured out over the course of 4 years that I hate running with headphones; I thoroughly dislike treadmills or any kind of indoor running; I need to be fully, uh, excreted before I head out for a run lest disaster strike; I'll run in a full downpour if that's what it takes; I do my best to avoid any "walking" or "jogging"; I usually don't like running with other people; and that it's best to torch your running clothes after eight months or so of running in them, lest you bring your barnyard funk out into public every time you run.
My favorite way of going about my routine is to pick a distance I want to accomplish, set up my distance-tracking GPS watch (a recent splurge), and then spontaneously make up some route I've never done before. I've seen weird corners of San Francisco this way, along with some cool business trip or vacation runs in places like Seattle, Atlanta, New York City; Kansas City; and Bend. Oregon. I know there's some residue of Type A personality in my DNA that compels me to do this, and it also ensures that once I've picked a distance - say, 7 miles - I'm going to complete that distance, no matter what. When I've had insomnia I've run with the late night/early morning raccoons in my neighborhood, and once encountered a possum glowering at me in the distance. I also tripped over my own untied shoelaces that first year, cutting up my palms and the side of my leg pretty badly. Of course I played it hard for sympathy back at home, and made sure to "triple tie" every run thereafter.
Next up is this thing called THE RELAY that I've doing with some people from my work. It's a race from Calistoga in California's wine country, down to Santa Cruz, which is about 90 minutes south of San Francisco. No, I'm not running the whole thing. I get three legs of roughly 7 miles each (20.1 miles total, to be exact), run over the course of less than 48 hours, including in the dead of night. What kind of masochistic idiot would run something like this? Uh, someone dealing with "the middle years" with the usual obsessive/compulsive behavior that seems to have defined an entire life.
Posted by Jay H. at 6:00 AM