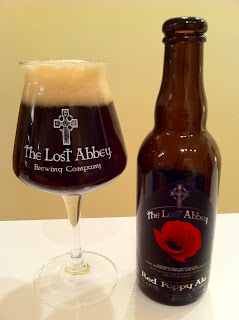 If you talk to sour beer dorks, and counterintuitively, their legion is growing rapidly, you'll hear a lot of hootenannying about "THE RED POPPY" from Southern California's LOST ABBEY. Oh it's sour all right. I'm even drinking it as I type this review. I was introduced to it by a couple of friends who'd gotten their hands on one of the limited batch of bottles that came out last month, and they gave me the lowdown on how to find my own bottle without selling a kidney to get it. "Just go to the Potrero Hill Whole Foods - they got a whole palate of 'em", I was told. This, after trying that same day to procure one at one of those specialty beer stores I frequent, a store that sold out of their allotment of THE RED POPPY in like an hour. I scored one at the aforementioned grocery store, and, well, here we are.
Like I said, its reputation preceeds it. I still count the easily-found MONK'S CAFE FLEMISH SOUR ALE as my personal favorite sour beer, along with a host of RUSSIAN RIVER BREWING masterpieces like "Temptation" - but it's truly hard to argue with an ale this well-made. Its rarity may be what gets tongues flapping, but you and I know there are plenty of rare beers. This one actually delivers, with a strong dose of sour cherries and that oaked, musky undertone that Lost Abbey has perfected in so many of their barrel-aged beers. I mean, you don't have to have the most sophisticated set of taste buds to notice right off the bat how fresh and delicious this is, even as you're reeling a bit from the puckering that comes from one of these "barnyard beers". You may taste almonds, tart cherries, dark fruits and even a little sweetness way off in the ether somewhere. Sweetness! It's one of those instances where I feel I got my $16.99's worth for only a mere 12.7 ounces. That price/quality ratio equation was the goal, and tonight I'm happy to announce: mission accomplished in spades. 9/10.
Posted by Jay H. at 6:00 AM