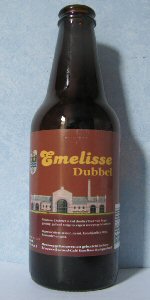 I've decided, after several years of ponderance, that the Belgian beer style known as the "dubbel" is, in fact, the finest beer style known to man. This utterance is not without some informed research. No, I have been enjoying dubbels like ST. BERNARDUS PRIOR 8 and CAPTAIN LAWRENCE ST. VINCENT'S DUBBEL for as long as I've been seriously contemplating beer, which began shortly before I started writing about it in early 2006. (Mind you, I've been ingesting fine ales for two decades now, but only dorking out about it for five years or so). But it was only recently, while sipping and contemplating the refined glory of an EMELISSE DUBBEL, that I had the good idea - the epiphany, really - to actually make a sport out of hunting down and drinking all the great dubbels of the world. All of them!
Well, not all of them. Calmer heads prevailed - mine, when I sobered up - and I decided to instead tackle Beer Advocate's Top 10 dubbels that I think I can find. No, this isn't the post where I review them. I haven't even started yet. The goal is to find, trap and then drink each of these in the very near future - and then report my findings. Will the candi-sugar, spiced and malty glory of the Belgian dubbel still be quite as figuratively intoxicating as it is today? We shall find out, my friends. We shall find out together. Onward!
Here are the 10 best dubbels, as rated by Beer Advocate readers, that I can actually find and therefore include in this survey:

That's my shopping list. 7 Belgians, 2 Americans and a Dutch. Only three I've never had before. And oh, I might actually sneak a few more dubbels into the "project", depending on what I can find. Stay tuned and watch this space for the results.