AFROBEAT EXPLOSION IN MY CAR

I’ve been digging deep into the 1970s African musical phenomenon commonly called “Afrobeat”, thanks to a burgeoning series of reissue CDs that have been pouring forth from record labels like Analog Africa, Soundway and Knitting Factory Records. Where Afrobeat begins and ends is certainly open to interpretation, so I’ll give you mine: if it features moderate-to-heavy amounts of funk, rhythmic African drumming, and is in any way influenced by the late 60s-and-beyond recording of FELA KUTI, it’s probably Afrobeat. Then again, it could be highlife, juju, cavacha, afro-funk or agbadja. Or something else. It’s not like I’m an expert here or anything. Let me run down the four CDs that have been blowing out my car stereo speakers the past month as I’ve been investigating the distinctions between Africa’s music of a generation ago.
FELA KUTI – “Open & Close/Afrodisiac” 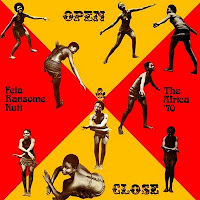 While I wasn’t looking, Knitting Factory Records went and digitized a huge portion of FELA KUTI’s back catalog, and put them in these cool gatefold digipacks with good liner notes and original album artwork. I won’t go into too much detail lionizing Fela Kuti, since he’s the acknowledged master of Afrobeat and really the continent of Africa’s biggest and most renown contribution to music over the past 50 years. I started my Fela journey a few years ago with a double CD of his greatest hits, and tracks like “Zombie” and “Roforofo Fight” are among the most sizzling and syncopated rhythm monsters ever created. Now I’m going to proceed into the LPs Fela was creating with his Africa ’70 band, including these two from the early 70s.
“Open & Close” was a proper LP from 1971, while “Afrodisiac” was an LP collection of singles spanning three years (1970-1972). Both are terrific, especially the title track on “Open & Close” – some of the most joyous, full-band, uplifting dance music I’ve heard. One thing I love about afrobeat and Fela’s stewardship of it is that most tracks clock in at well greater than 10 minutes, so you lock onto a groove and you don’t let go until you've blown past your freeway exits. I chose this disc pretty much at random and it was a "hella" strong first choice. 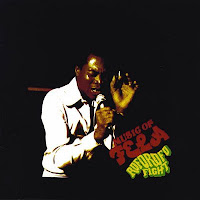 Another stomping disc of form-defining afrobeat here, with the fast and subtle scorcher “Roforofo Fight” being the lead dog. This one drags a little bit on the later LP tracks, only to be vaulted back up again by the looong singles “Shenshema” and “Ariya” that end the disc. (When they say singles, I mean – were these 45rpm 7-inch singles? Because I didn’t think any 12” maxi-groove singles were being made until well into the disco era). Right when I bought this CD I also bought the WAX POETICS magazine Africa issue with Fela on the cover. I learned what a dictatorial egomaniacal bastard he was in the course of several interviews with his bandmates and compatriots, and then I’d put this CD on, listen to it three times straight on a commute, and all was forgiven. 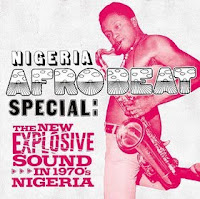 This collection doesn’t quite have the oomph of the aforementioned Fela stuff but it’s not for lack of variation nor the crazy jambalaya of sound coming out of this disc. There’s a strong tinge of psychedelia that crops up in several numbers, including the awesome “We Dey Find Money” from ERIC SHOWBOY AKAEZE & HIS ROYAL ERICOS, which I’m posting for you to listen to here. This collection is from Soundway, who are master crate diggers devoted to bringing long-lost records from around the globe back to the people. They’ve got a growing series of discs just like this one, including a “Ghana Special” that I also have that’s probably a little more even, and which I'll review later sometime. That said, this thing’s a great listen before it devolves into easy listening “danceable mellowness” about two-thirds through. Oh – and there’s a raucous Fela track on here, too, called “Who’re You (Original 45 version)”, and it’s a total bodyfat-melter. 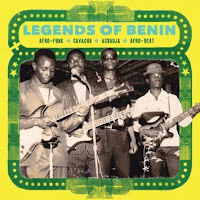 Picked this up totally on a whim, perhaps hoping to have the same sort of shock of discovery I got when I heard the original “GHANA SOUNDZ” compilation way back in 2003. Benin? Yeah, that’s right – sandwiched right next to Togo and Nigeria in Western Africa. This is subtitled “Afro-Funk – Cavacha – Agbadja – Afro-Beat 1969-1981”, and it makes for a varied and very impressive overview of ethnic dance sounds from this tiny country during the 70s. It has a super-detailed book of liner notes with incredible old photos of the band in action, sporting the best in 1970s African musician-wear. As on “Nigeria Afrobeat Special”, there’s one clear winner – the tracks from ANTOINE DOUGBÉ. This guy led a totally smoking band – not in the James Brown/Fela sense of loud percussive sound, but a band who operated as a tight, propulsive unit that most assuredly could fill a dancehall floor from the word go. I’m posting my fave track on this excellent collection, “Honton Soukpo Gnon”, and it’s one of 4 tracks from DOUGBÉ, including one with ORCHESTRE POLY-RYTHMO, whom Wax Poetics wrote about in that Africa issue I was tellin’ you about and who I want to hear more from. I say if you’ve got $35 to spare, pick this one up and the Fela “Open & Close” disc and you’re off to the races, Afrobeat style.