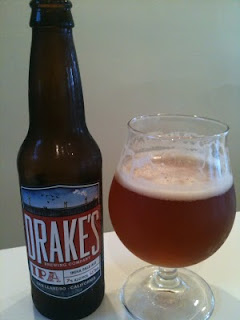 I may have ceased publishing a blog exclusively dedicated to reviewing craft & artisinal beer - but it don't mean I've stopped drinkin' 'em! I made a habit over the years of collecting notes on new ones I've tried, and even have continued through the years to assign a rating to each of them. It's a disease, a curse - and a cross I must bear for the people. Here are some micro-reviews of some of the things I've tried since HBJ bit the dust:

DRAKE'S IPA - This Bay Area brewer is under the radar to most folks, but I've found that they make a mean, bitter, intense set of IPAs. This is no exception - strong piney hop taste and a smell that'll knock the socks off yr ass. Great non-double Double IPA. 8/10.

MAD RIVER "THE MAD BELGIAN" - From a Humblodt County brewer who conitnues to impress, this Belgian-style ale has a light sweetness with a strong taste of honey. Really fragrant and medum-bodied and good. Close your eyes and you're not surrounded by hippies in Arcata - you're in Brussels, baby. 7.5/10. 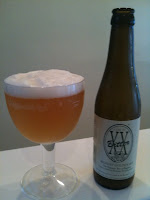 DE RANKE BITTER XX - Whoa. Hoppy and acidic, with a big 'ol kick of tanginess. This is a real Belgian ale, unfiltered and unpasteurized and big big big. It's like drinking a sour ale to prove your beer-drinking mettle - this is the "bitter" corrollary. Good luck to you. 6/10.
MARIN BREWING "BRASS KNUCKLES" - Draft only, this is a boozy, still-as-Walden Pond double IPA from just over the Golden Gate Bridge near San Francisco. Neither citrus nor piney, but a different hungry beast entirely. I really enjoyed it and will seek it out, presently. 8/10.
RUSSIAN RIVER "SUPPLICATION" - I'll win no points with the Beer Advocate crowd, but I really think there's such a thing as too sour.  Hardcore puckering cherry action that's delicious at times,. totally unstomachable at others. A chore. 6/10.
LAGUNITAS "THE HAIRY EYEBALL" - A sweet, malty brown ale with a sticky mouthfeel. Not a whole lot of hops, but a nice mouth-warming taste nonetheless. If you dumped a bottle of this on your hands let's just say you'd be washing up 'til tomorrow morning. 7/10. 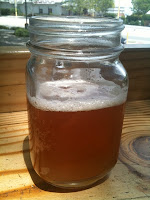 SANTA CRUZ MOUNTAIN BREWING IPA - My notes simply say that this organic IPA was "bitter and fruity - good for lunch". Yep, had it for lunch out of a mason jar. Picture right here. I'd do it again, too. 7/10.
OAK CREEK BREWING - THREE BEERS - I recently took a vacation to Sedona, Arizona and tried not one, not two but three beers from the local brewery there, Oak Creek Brewing. We hung out at the pub itself and imbided their beers in other locations as well. Not a ton to say about the, except that their HEFEWEIZEN was buttery, lemony and full of yeast - a lot sharper than most. 7/10. Their SAISON is also a 7/10 and washes down pizza quite well; and I can't remember what I thought about the PORTER at all.
LAGUNITAS WILCO TANGO FOXTROT - Another copper-colored malty brown ale from these guys, this time with some definite hops and light sweetness. It made the "Lost" finale just a little less painful. Yet another 7/10.
Posted by Jay H. at 6:00 AM