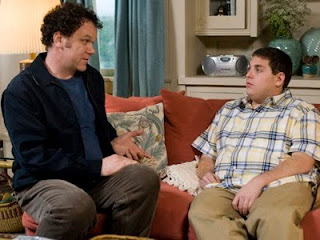 I have a new film-going motto: “If it’s Duplass, I’m In”. That’s due to my admiration for the three films I’ve seen by directors Mark and Jay Duplass to date: “Baghead”, “The Puffy Chair” and now “Cyrus”, as well as Mark’s acting skills in the underrated and not-seen-enough comedy “Humpday” from last year. “CYRUS” is their newest, and it’s their tentative medium-budget bid for the multiplex – and coincidentally enough, I saw it at a multiplex (I think). It concerns a middle-aged average white male named John. played by John C. Reilly, who’s riding a bit of a personal 7-year losing streak after being left by his wife, played by Catherine Keener. She and her fiancé work to get him set up with another woman, and amazingly enough, the nearly equally-hot-middle-ager Marisa Tomei** takes a quick interest in lovable loser John, and they start an improbable fling that escalates quickly.
Trouble is, she has a live-in 21-year old son named Cyrus who has “mommy issues”, shall we say – though this isn’t readily apparent at first. Through a subtle series of events, these two men essentially do battle over who will live with her and win the honor to cling to her the tightest. And really, that’s about it – and it’s hilarious and often cringingly real the whole way through. I love the way these guys make films and get the most out of their actors. Young Jonah Hill – yeah, the potty mouth from “Superbad” – is probably the best part of this excellent film, and really, it’s all in the eyes. When he stares at John or silently mouths “fuck you” to him when his mom’s not looking, one is unsure whether he’ll quickly turn into a homicidal maniac, or if he’s simply a sniveling snot-nosed kid in need of more attention from mommy. He doesn’t have to say much – nor does anyone.
The Duplass Bros are great at winding a simple domestic situation extremely tight and filling it with comedic tension. It’s the same approach Lynn Shelton used in her “Humpday”, with Mark Duplass in the leading acting role. There looks to be forming quite an impressive little indie cadre right now on the margins of American film. See this one by all means. While it’s one of only 3 or 4 films I’ve seen in the theaters in 2010, it’s absolutely the best.

** I wanted to make a small observation about Hollywood actresses who allow themselves to age naturally, as the stunningly beautiful Keener and Tomei have. First, it’s depressingly rare. Second, and I’ll say this only once – plastic surgery horrifies far more men than society might have you believe. I feel for any woman who thinks it’s attractive to lift, pull and yank her skin into something that every one of us can see from forty paces is fake, fake, fake. I instantly lose respect for her, and find her less attractive than I might otherwise have. No one enjoys getting older and losing their visible youth and vitality, yet those women who show comfort, acceptance and peace with the aging process have a certain radiance that is readily visible. I was shocked at seeing both these women in this film actually looking like the 51 (Keener) and 45 (Tomei) that they are, because it seems that in Hollywood that’s really not allowed any more.
Posted by Jay H. at 2:25 PM