WHO ARE YOU, “ALE INDUSTRIES”? 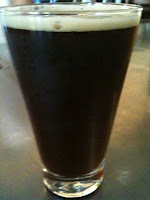 I haven’t had much to rave about beer-wise in this space since I converted over from my old Hedonist Beer Jive blog. Sure, there’ve been some decent beers reported on here, but nothing that made me say “What in the Sam Hill is going on here??!?”. Until two days ago, that is. I was "kicking it", as we say, at City Beer Store in San Francisco, and they had something on tap called RYE’D PIPER from an outfit called ALE INDUSTRIES. Ale Industries? Sounded to me like someone’s bogus beer spy name, in the “Acme Beer Company” vein. But a hoppy, red rye ale sounded pretty all right to me – and oh – oh, it was. This is a world-class imperial red ale without the imperial. Weighing in at just 5% ABV, ALE INDUSTRIES RYE’D PIPER is just a wonderfully tingling swirl of malts and hops. It has a dry taste to it while still remaining juicy and fresh, and a pinch of spicing that I’m assuming is the rye. Excellent dosage of hops presented in a really full-class manner, in perfect concert with the roasted malts. It all works, my friends.

So I had to find out who these folks were. Turns out that Ale Industries have gone and put up a web site and everything. They’re even talking about anniversary beers, and I didn’t even know they’d been born yet til a couple days ago. And they’re based in Concord, California, only 45 minutes from my home on a good traffic day, and famously home to the Sleep Train Pavilion, where I saw my first live concert back in the 70s – Arthur Fielder and the Boston Pops. (That show was off the hook, by the way). Anyway, these guys are off to a roaring start in my book and I’m going to investigate everything they put out, starting right this second. 9/10.
Posted by Jay H. at 5:42 PM