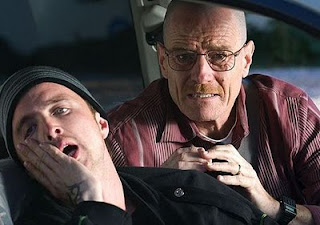 There was an article in my wife’s Entertainment Weekly mag bemoaning the current state of American film, with the money quote from an executive being something along the lines of “Five years ago it was questionable when people would claim that modern TV was just as creative and interesting as movies; now there’s simply no doubt”. Seconded and thirded. Starting with the best show on TV right now, “BREAKING BAD” , we’re in a golden age of television, where the best writers, directors and actors are working together to create the best small-screen entertainment ever produced. Thanks to HBO for kick-starting the process with “The Sopranos”, and then furthering it with the amazing trifecta of “Six Feet Under”, “The Wire” and “Curb Your Enthusiasm” – all told, possibly the other 3 finest TV shows I’ve ever seen. To say nothing of “Extras”, “Lost”, “Peep Show”, “Mad Men” and “Battlestar Gallactica”. Nor “Parks and Recreation”, “30 Rock” and both versions of “The Office”, before the US version jumped the shark.
Yet it’s BREAKING BAD that has me the most captivated, and which truly passed a new creative milestone with the 13-episode season that wrapped up this past Sunday. The show has all the main characters spinning out of control and into a vortex of badness, centered around one very confused, mixed-up, yet driven man: Walter White, played by Bryan Cranston. In case you’re only reading about the show for the first time, here’s my 4-sentence synopsis: Walter White is a milquetoast chemistry teacher with not a lot of money who learns he has terminal cancer. To provide money for his family after he dies, he decides to make and sell crystal meth with one of his students (Jesse, played by Aaron Paul) in the here and now, using his advanced chemistry skills, setting off a rapid, dangerous and violent unwinding of the normal, suburban family life he’d cultivated over 50 boring years. As he moves out of near-death and into remission, Walter comes to be intoxicated by the danger and power his new life has provided, and also becomes a fantastic liar who’s always one step ahead of everyone else (the law, his family, the Mexican cartels) by guile, luck and trickery. He begins to drag everyone down with him, and at the end of Season 3, it’s clear that he’ll do everything and anything to not only stay alive, but to keep his power and new self-image.
I loved the ending of Season 3, in which (spoiler!) Walter has Jesse murder an assistant chemist named Gale whom the American cartel would like to have replace Walt. This is the murder of a sympathetic character done in cold blood, and it’s even worse in terms of morality than when Walt let Jesse’s girlfriend Jane OD in front of him, in order to help save his own skin from the law. That was passive murder of a junkie – this is active murder of a quote-unquote “good guy”, albeit one who cooks crystal meth for a living. Not like we didn’t know crazy Walt was sliding toward the abyss very rapidly (in the previous show he murdered two heroin dealers who were about to kill Jesse), but this cements Walt & Jesse as the guys who are going to have to bring down the very powerful American drug cartel in Season 4 just to stay alive. It’s going to be a blast. I can’t think of another show this gripping from the past twenty years, outside of “The Wire”. I think they might be the two best TV dramas of all time.
I have only one bone to pick with this show, and it’s a fairly small one – it’s actually more with critics who keep writing that Jesse, played by Aaron Paul, should be drowning in Emmys for his “searing performances”. Am I the only one to find Jesse the most inconsistent and least believable person on this show? Jesse is infused with moral clarity and ethics in one moment, and then he’s the worst hedonistic, dumb-ass, faux hip-hop “wigger” imaginable the next. I don’t buy it. Jesse is mostly incredibly annoying, and acts so ridiculously stupid and reckless for the majority of the show that when he’s all of a sudden having flashes of insight, talking in a somber voice, filling his beautiful blue eyes with tears over his gorgeous, smart, dead girlfriend Jane (who would never in a million years have been with the clown we see in the rest of the show, outside of their mutual love of heroin) – it strikes me as somewhat hollow. I like Aaron Paul and I think he does what they tell him to do extremely well – I just don’t like the howling inconsistencies in his character. I hope they sober him up a bit after this last bombshell shocker of a season ending, and help him grow up a little bit. Enough with all the “yo yo yo”s, you know what I mean?

I could go on and one about some of the other incredible performances – Anna Gunn, who plays Walt’s wife Skyler, in particular. She’s amazing, and I hope we see more of her in Season 4 than we did this year. I suspect that we will, since she’s now signing on to help Walt launder his drug money using her advanced bookkeeping training (!). In short, BREAKING BAD is a landmark TV event every week, and I’m heartened to see more and more people signing on. The show just got renewed as well, so get the DVD player fired up this summer and/or start Tivo’ing the AMC Breaking Bad marathons they’ll be having all year. I promise you won’t regret getting going with this one.
Posted by Jay H. at 11:48 AM