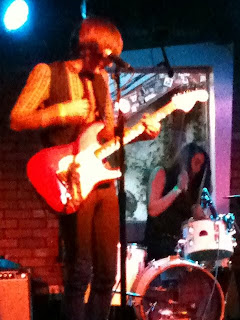 Here’s a real rarity on the ‘Jive – a live show review. The last time I tried to see local DIY/minimalist harmony-trio GRASS WIDOW here in town at the Amnesia Bar, I was stymied by my curmudgeonly lack of tolerance for insufferable opening bands “Wet Illustrated” and “The German Measles” – oh, and by the fact that the clock was ticking midnight, and on what we used to call a school night at that. Can’t do it anymore – I just can’t gut it out through bad openers the way I used to. Beer used to get me through any and all musical calamities, but now anything even approaching drunkenness just makes me even more uncomfortable, woozy and unable to bear the cross in silence. So when they did the unthinkable, and shuffled Grass Widow from their penultimate position in the order to “headliners” at the 11th hour, I beat a hasty retreat from the club, cursing my age, my lost $7, youth in general, President Obama, Bush and his fascist wars, the growing police state and the unfairness of the  income tax. I presently made a vow to see Grass Widow again, yet on terms of my choosing.

Since they wouldn’t play a 5pm backyard barbeque at my house, I resigned myself to last Sunday’s “all ages” show at the Bottom of the Hill – which commenced at the Hedonist Jive-friendly hour of 8pm (yes!). The first opener, THE BATHS (whom I’ve read may now be called the ROYAL BATHS, and who are pictured above) were outstanding. This is another San Francisco trio who trend in a more primitive psychedelia direction, with really simple thumping drum/rhythm patterns a la The Cramps or Birthday Party giving way to an expansive, shoegaze-like sprawl of noise and reverb. Each member had a look at odds with the other, with a 60s mod-shag guitarist, a cablinasian college kid guitarist, and a Woman Who Runs With The Wolves on drums. They would lock in at the same time on some 5-minute screamer they were riding, and take it all the way up into the astral plane. Great band, and one I’m definitely pleased to now be marginally acquainted with.


SONNY & THE SUNSETS, also from San Francisco, wrote one of my favorite songs of last year, “Death Cream”. Everything else I’d heard by them failed to move me much, but they’re actually a hoot live. They’re led by a charismatic Mark E. Smith-like frontman (Sonny!) who spits out stretches of verse in a sort of party-rock atmosphere backed by an exceptionally tight and garagy band (The Sunsets!). There’s a lady with a tambourine and a nice set of backing pipes, a drummer and bassist who know their way around layin’ it down, and a general “positive” feel that I couldn’t help liking. Positive rock. Get on board now. 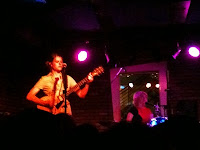 Finally, and without any last-minute lineup shenanigans (TY SEGALL headlined – I’ve seen him twice recently and chose to go home to sleep instead), GRASS WIDOW materialized and knocked out thirty minutes of tightly-wound chug, right out of the 1979 English all-girl-band playbook, leavened with a dash of URINALS as well, even starting the set with their note-perfect version of “Black Hole”. They’ve got a new record coming out any minute now, and they played a few from it, all of which seemed more or less in line with their previous two records and worthy of some vinyl contemplation when the time is right. Not that I’m fully on top of the scene right now, but if they’re not one of the best four or five bands going right about now, I’d like to meet the one or two that might be better. All local, all great, and I was home snoring by 11pm. “A magical evening of music and song”.
Posted by Jay H. at 6:00 AM