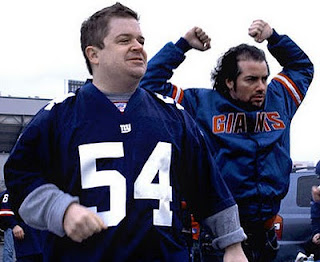 Robert Siegel’s 2009 film “BIG FAN” is an exceptionally impressive debut and a cringe-inducing trip into the mind of a never-grow-up sports obsessive. One thing about my own sometime-addiction to sports (baseball most of the time; often NBA and NHL as well) that keeps me clinically sane, I believe, is my realization that they are, at the end of the day, games for children – and should therefore be treated with the proper distance when necessary. And we’re all overgrown children at some level, aren’t we? That’s really a key message of “BIG FAN”, that the overgrown man-children roam about us everywhere, and perhaps are us when we’re herded into the pack mentality that is our collective nationwide adoration of professional sports. I loved the film, and felt like it was an excellent heir to the depressing black comedies of the 1970s.
Patton Oswalt – the most loveable fat guy on the planet, and one of the best stand-up comedians I’ve ever seen – is a note-perfect star for the film. He plays a late thirtysomething Staten Island parking garage attendant named Paul who lives with his mom in a dingy old house, and whose entire life and psyche revolves around the New York Giants football team. When he calls into his favorite sports radio show every night, he plans out his scripted calls as meticulously as a head coach crafts scrimmage-line plays in the late fourth quarter. Usually these calls are “we’re gonna win” insults thrown at “Philly Frank” or whatever it is they dubbed the Philadelphia Eagles fan who calls the New York sports-talk shows every night to taunt the local fans. Though we think at first that we’re supposed to feel sorry for Paul, in truth he’s actually a pretty happy guy until people in his family start questioning his obsessions. He simply wants to live his life around his love of football, and he doesn’t want a girlfriend, a meaningful job, or anything else that gets in the way of this Sunday’s Giants game.

Alas, Paul’s obsession takes him into the reality that is professional sports athletes, their egos and their drug problems, and his child-like enthusiasm when he sees his favorite player Quantrell Bishop in his neighborhood results in him getting his ass severely kicked by that same Quantrell Bishop. This sets in motion the choice that Paul must make – work to prosecute and sue the suspended and disgraced Quantrell and seek the justice that virtually anyone would, or do everything to deny what actually happened to him, so that the Giants might have a better chance of winning with Quantrell back in the lineup?

Because this film takes place in the blue-collar borough of Staten Island, in a New York that is unglamorous and dirty, it reminds me greatly of “Taxi Driver” and other 70s films full of loners, misfits and freaks – back when ALL of New York was that dirty and seemingly depressed. There are some excellent little touches that I noticed that really showed me that Siegel knows what he’s doing with this character and the world he exists in. There’s one scene where Paul’s goombah brother, who has made a newly-rich life for himself as one of those annoying injury lawyers who advertises on TV, tries to start his new DVD player and gets the “spinning DVD wheel graphic” for a minute while everyone impatiently waits for the show to start. It’s a little thing, but it highlighted just how newly this very recently working-class guy came into his wealth, so much so that his big-screen TV and DVD player barely work together and he’s still trying to figure out what it means to be a big shot. Then there’s the Eagles fan Paul confronts in a bar near the end of the film – with his tam-o-shanter and ridiculous accent, this guy is about as “Philadelphia” as it gets, and I laughed every time he opened his mouth. I‘ve met this guy, and if you’ve been in sports bars on the east coast, you have too.

When Paul finally intones to his hectoring mother, who’s trying to get him to be more like his brother and sister, “But I LIKE my life! I don’t WANT their lives!”, it tells you all you need to know about Paul and his obsessions. He just wants to be left alone to be a big fan and a big child. Like I said, there are a lot of us that certainly know the feeling.
Posted by Jay H. at 5:31 PM