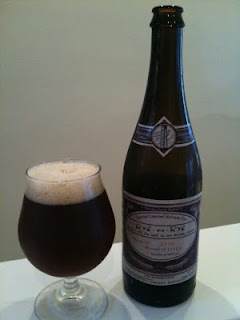 Whenever I find myself in Overland Park, Kansas – which is more often than you’d think, thanks to some fairly frequent business work out thataway – I make a beeline for that liquor store off of Metcalf over by the Whole Foods; you know, the one that always has the brand new numbered bottles from the BOULEVARD BREWING SMOKESTACK SERIES. The Smokestack Series, for those not yet hip to it, is this premier Midwestern brewer’s limited-run, high-gravity, specialty beer line - usually featuring Belgian styles, funky beers or big, bad IPAs. Last trip I pulled down a bottle of something called BOULEVARD RYE-ON-RYE, which given my generally excellent experience with the Smokestack stuff, had me pretty ready to do battle with it at once.
And when I say limited, I mean it – though not in the Black Tuesday/Darklord sense of the word. Mine was numbered #2710 out of a total of 12,148 bottles ever created. So if you really wanted that particular number, I’m sorry, but I have already completed my contemplation of said bottle. RYE-ON-RYE is aged in charred oak rye whiskey casks, and it’s made with three different hops, two of which I’ve never heard of: perle magnum and saphir. You think they maybe made those up? This beer hits hard with thick malts, molasses and light oak. The rye is indeed there if you look for it, but I didn’t find it to be dominant, just present in the aftertaste. This beer’s good at concealing its 11% alcohol, and it also keeps the hops fairly low (I could have used a few more, honestly). As it warmed it started to taste a little sweeter in a toffee sorta way. Or something. Solid stuff, but a little boring for such a jumbo ale. I had a better time with the SAISON-BRETT, the Smokestack surprise I quaffed a few months before this one. 6.5/10.
Posted by Jay H. at 6:10 AM